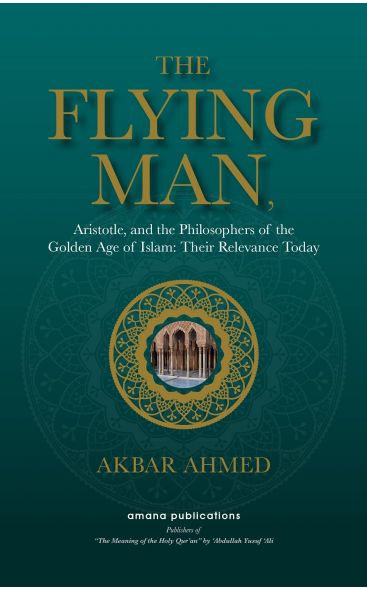 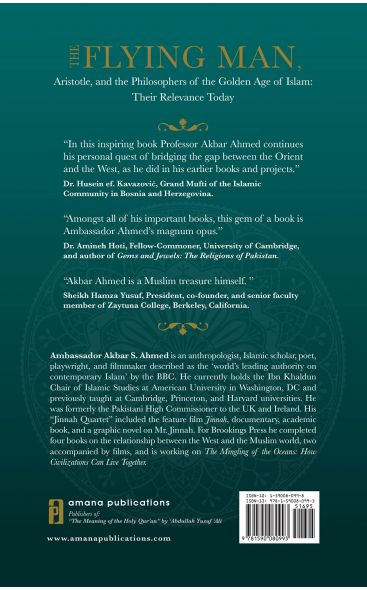 The Flying Man : Aristotle, and the Philosophers of the Golden Age of Islam : Their Relevance Today

He introduces Ibn Sina, Ghazali, Ibn Rushd, & Ibn Arabi, and then shows their important later influence on the West through Maimonides and St Thomas Aquinas. Ahmed shows how Islam and the advancement of society can go hand-in-hand, perhaps by learning from the methodology & teachings of these luminaries.

“In this inspiring book, Professor Akbar Ahmed continues his personal quest of bridging the gap between the Orient and the West, as he did in his earlier books and projects.” --Dr. Husein ef. Kavazović, Grand Mufti of the Islamic Community in Bosnia and Herzegovina.

“Amongst all of his important books, this gem of a book is Ambassador Ahmed’s magnum opus.” --Dr. Amineh Hoti, Fellow-Commoner, University of Cambridge, and author of Gems and Jewels: The Religions of Pakistan.

The Flying Man, Aristotle and the Philosophers of the Golden Age of Islam: What is their relevance today? This irenic message is critical in facing up to our collective existential challenges such as the Coronavirus pandemic, climate change, rising right-wing populism, racism, Islamophobia, and growing global social inequality – issues that Ibn Khaldun (1332-1406 AD), a philosopher of history and the perhaps the world’s first Sociologist, would no doubt have developed theories about. --Dr. Sadek Hamid, an academic who has written widely about British Muslims.

Ambassador Akbar S. Ahmed is an anthropologist, Islamic scholar, poet, playwright, and filmmaker described as the ‘world’s leading authority on contemporary Islam’ by the BBC. He currently holds the Ibn Khaldun Chair of Islamic Studies at American University in Washington, DC, and previously taught at Cambridge, Princeton, and Harvard universities.

He was formerly the Pakistani High Commissioner to the UK and Ireland. His “Jinnah Quartet” included the feature film Jinnah, documentary, academic book, and a graphic novel on Mr. Jinnah. For Brookings Press, he completed four books on the relationship between the West and the Muslim world, two accompanied by films, and is working on The Mingling of the Oceans: How Civilizations Can Live Together.