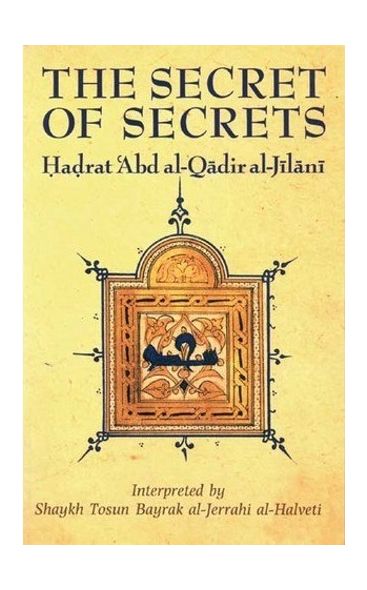 The Secret of Secrets

An interpretative translation by Shaykh Tosun Bayrak of Sirr al-Asrar by Hadrat Abd al-Qadir al-Jilani (1077-1166 AD), considered by many to be one of the greatest saints of Islam and the eponymous founder of the Qadiriyya order. This book, appearing in English for the first time, contains the very essence of Sufism, giving a Sufi explanation of how the outward practices of Islam - prayer, fasting, almsgiving, and pilgrimage - contain a wealth of inner dimension which must be discovered and enjoyed if external actions are to be performed in a manner pleasing to God. When this is achieved the soul finds true peace and the spiritual life becomes complete.

Shaikh 'Abd al-Qadir Jilani is widely known by the honorific, 'the Sultan of the Saints () of Allah'. In the history of the Saints of Islam, Shaikh Abd al-Qadir stands out as being unique, in the broad scope of perfection that includes his lineage, his complete development, piety, knowledge of the religion and adherence to the Sacred Law (Sharia), his intimate and direct knowledge of the Divine, and his establishment by the Lord of All the Worlds at the level of Reality (Haqiqa). Shaikh 'Abd al-Qadir lived almost a thousand years ago, but his words transcend the time and place in which they were recorded to span the centuries without difficulty.

Sheikh Tosun Bayrak al-Jerrahi al-Halveti (Istanbul: 1926) is an author,  and Sufi. He served as a government official in Ankara, Honorary Consul of Turkey in Morocco and is the Sheikh of the Jerrahi-Halveti Order in America.

He studied Biological Sciences at Robert College, Istanbul; Art, Architecture, and Art History in the Studios of Bernard Leger and Andre Lhote in Paris; Architecture at the University of California, Berkeley; and History of Art at the Courtauld Institute of Art, London. He received a Masters in Fine Arts from Rutgers University. A retired professor of art and art history from Fairleigh Dickinson University, New Jersey, he has exhibited widely in the United States and is also a Guggenheim fellow. He retired from the art world in the 1970s and devoted his life to the study and teaching of Islam and Sufism.

Sheikh Tosun Bayrak has translated dozens of books on Islamic spirituality, but he is particularly known for his efforts on the works of the Sufi mystic Ibn Arabi. His translations of classic works of Sufism include Abdul Qadir Al-Jilani Secret of Secrets (Islamic Texts Society, 1992), Inspirations (Threshold Books), The Book of Sufi Chivalry (Inner Traditions, 1991), Suhrawardi: The Shape of Light (Fons Vitae, 1998), The Name and the Named: Divine Attributes of God (Fons Vitae, 2000), and Imam Birgivi The Path of Muhammad (World Wisdom, 2005).

‘This work, which contains a biographical introduction to one of the author’s least-known works, represents a valuable contribution to the field...The translator’s introduction provides an insight into the various personal qualities and divine graces which are recognized in combination as a proof of sainthood...It is clearly and elegantly presented, accessible, and has the merit of combining metaphysical doctrine with devotional ethics as encapsulated in the life and work of one of the most endearingly popular Sufis of all time.’
- Journal of Islamic Studies

‘A book of great importance to Sufism...Sheikh Tosun has done an admirable job in presenting not only a translation but a lucid interpretation of one of Jilani’s most important works.’
- Gnosis