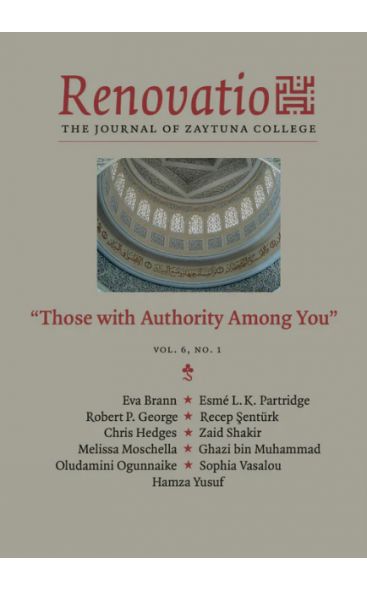 Renovatio: Those With Authority Among You - Vol. 6 No. 1

Believers, obey God, and obey the messenger, and those with authority among you. And if you dispute over anything, refer it to God and the messenger, if you believe in God and the last day. That is best and most excellent as a determination. - Qur’an 4:59

Renovatio: Suffering As Surrender - Vol.4 No.1

Renovatio: The Enigma of Language - Fall 2018

Renovatio: The Art of Being Human - Spring 2018

"Believers, obey God, and obey the messenger, and those with authority among you. And if you dispute over anything, refer it to God and the messenger, if you believe in God and the last day. That is best and most excellent as a determination." -Qur’an 4:59

How the new victimhood culture rejects human dignity and divinity.

The internet places knowledge at our fingertips, but to assert that we can know things wholly independently is, in one interpretation of the Qur’anic verse, to “transgress our limits.”

Humans Are Designed for the Rule of Law

The consequence of human dignity is not unfettered freedom but the right to be subject to rules that respect humans as rational agents.

Does a fiction need to originate in, and rely on, a fact of reality? The answer seems to be: Yes.

Islamic Law and the Children of Adam

Many contemporary human rights can be grounded in laws originating from Islam’s insistence on universal brotherhood.

The Logic of the Birds

Poetry is perhaps unique among the arts for its capacity to combine seeming opposites into a totality that mirrors that of our own being.

A Multi-Miraculous Verse of the Qur’an

The Rule of Law of Love, affirmed by the Qur’an, can resolve many of the questions that have bedeviled people and thinkers in the West and in Christianity to this day.

Can We Think Deeply About Important Ideas Without Writing About Them?

Writing that cultivates the ideals of intellectual and moral growth that motivate us must eschew the illusions of originality and detachment.

How the Cult of the Self Undermines the Rule of Law

The cult of the self, celebrated at the expense of justice, undercuts the foundations that make the rule of law and democracy possible.

What a Pandemic Reveals About the Rule of Law

Emergencies often require bypassing the rule of law, but the common good, in the long run, ultimately depends on legal predictability.

A Muslim Declaration of Human Rights?

Muslims have long endeavored to produce a modern human rights declaration holistically rooted in their tradition. How might they finally succeed?