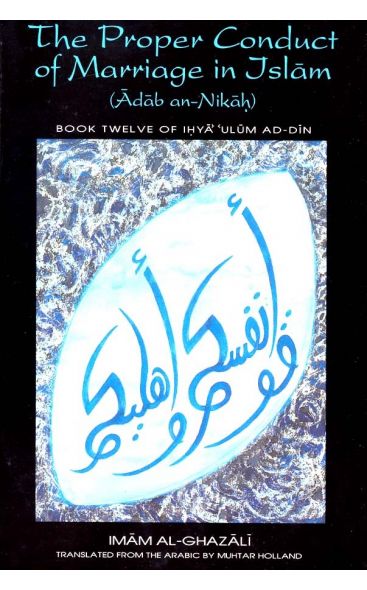 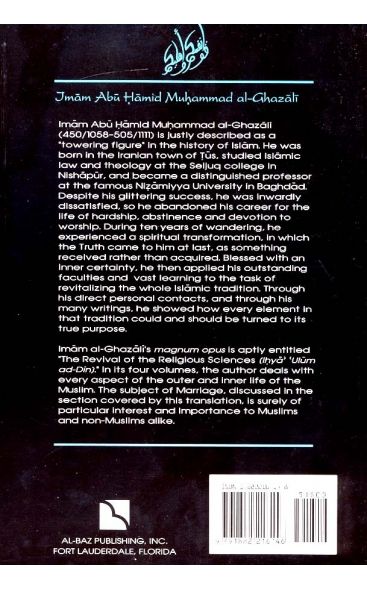 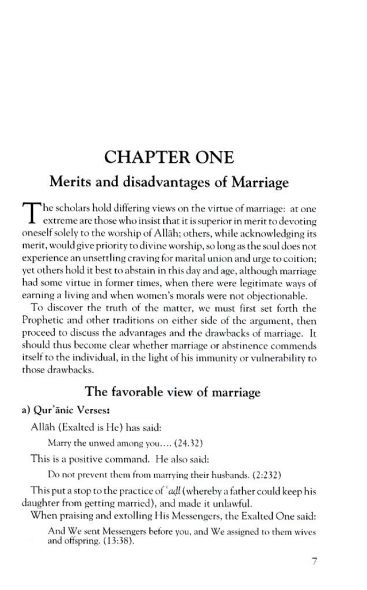 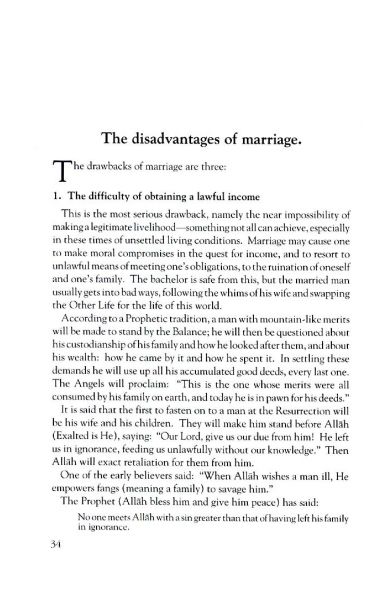 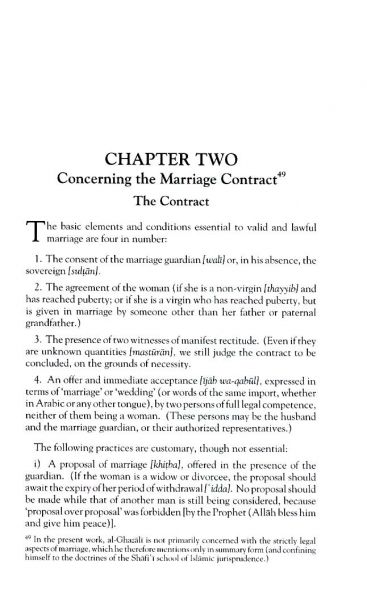 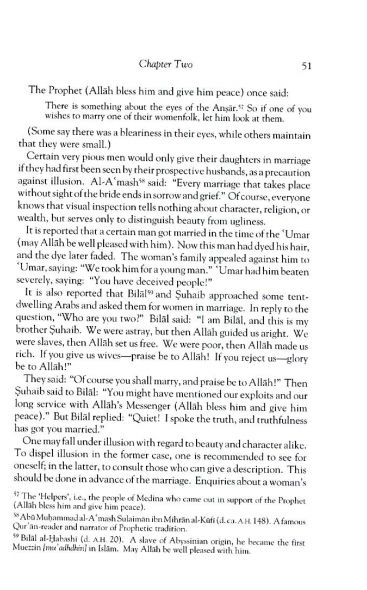 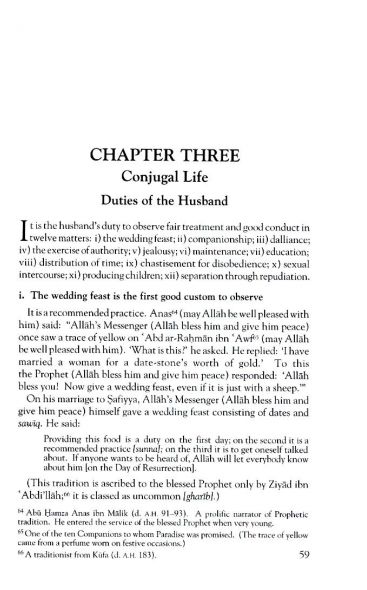 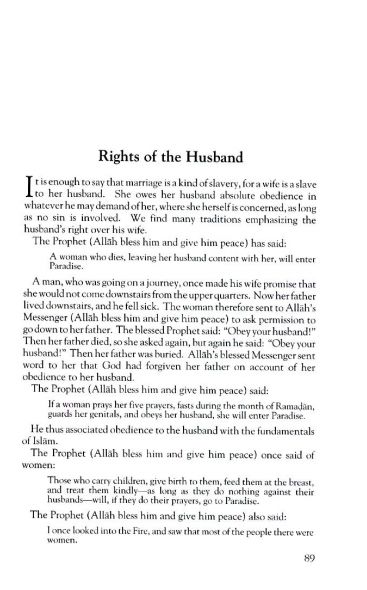 The Proper Conduct of Marriage in Islam (Adab an Nikah)

This is Book XII of Imam Ghazali's 'Ihya Ulum al-Din (Revival of the Religious Sciences), translated by the eloquent Muhtar Holland.

This is Book XII of Imam Ghazali's 'Ihya Ulum al-Din (Revival of the Religious Sciences), translated by the eloquent Muhtar Holland. Topics of the section on marriage in the 'Ihya include benefits of marriage, challenges of marriage, selecting a spouse, rules of married life, relations between husband and wife, having children, preferred actions at childbirth, obligations of spouses to each other, and avoiding divorce.

Imam Ghazali's magnum opus is aptly entitled "The Revival of the Religious Sciences [Ihya' 'Ulum ad-Din]." In its four volumes, the author deals with every aspect of the outer and inner life of the Muslim. The subject of Marriage, discussed in the section covered by this translation, is surely of particular interest and importance to Muslims and non-Muslims alike.

On the merits and disadvantages of marriage.

1. The favorable view of marriage, supported by:

3. The benefits of marriage:

a) The begetting of children. b) Immunity from Satan; relief from craving; protection against the perils of lust. c) Relaxation and recreation for the soul. d) Freedom from concern with running the household. e) Self-discipline and training through custodianship and guardianship.

4. The disadvantages of marriage.

a) The proposal of marriage [khitba]. b) The religious address [khutba] before the marriage. c) The bride should hear all about the bridegroom. It is likewise recommended that the groom should get to see the bride before the wedding. d) It is good to invite other virtuous people, as well as the witnesses. e) The bridegroom should marry with the intention of upholding the Prophetic example, of preserving modesty, of seeking offspring, and of obtaining the other benefits mentioned above. f) It is recommended that the marriage be contracted in the mosque and in the month of Shawwal.

2. Concerning the qualifications of the bride.

a) She is already married to another. b) She is in the period of withdrawal ['idda] following widowhood, repudiation, or intercourse of uncertain legality. c) She has become an apostate ['murtadda] from Islam. d) She is a Magian [Zoroastrian]. e) She is an idolatress or atheist [zindiqa], owing allegiance to no Prophet or Scripture. f) She is a woman of scriptural religion but embraced that religion after it had been falsified, or subsequent to the mission of Allah's Messenger (Allah bless him and give him peace). g) She is a slave, while the prospective husband is a free man, either capable of supporting a free woman, or impoverished but immune to moral danger if he remains unmarried. h) She is wholly or partially owned as a slave by the prospective husband. i) She is closely related to the prospective husband, being an ascendant or descendant of his, a descendant of his ascendants in the first degree, or a descendant in the first degree of a more remote ascendant. j) She is forbidden through the relationship of suckling, which creates the same impediments as blood kinship with ascendants and descendants. k) She is related to him through marriage. l) She would be a fifth wife. m) Her sister or her aunt (paternal or maternal) is already married to the prospective husband. n) If the prospective husband has thrice repudiated her, she is unlawful to him as long as she has not consummated a valid marriage with a different husband. o) When the man has pronounced the oath of anathema [li'an] against his wife, she is thereby forever unlawful to him. p) Either party is in a state of consecration [ihram] for the Pilgrimage or Visitation [to Mecca]; the marriage cannot be contracted till deconsecration has been completed. q) She is a non-virgin minor; marriage with her is not valid until after she has attained puberty. r) She is an orphan; marriage with her is not valid until after she has attained puberty. s) She was one of the wives of Allah's Messenger (Allah bless him and give him peace), and was left a widow by him, or he has cohabited with her; such women are 'Mothers of the Believers.'

Qualities in the woman that are conducive to a happy married life:

3. Qualities desirable in the husband.

Points to be considered by the marriage guardian [wali].

1. Duties of the husband.

The husband must observe fair treatment and good conduct in twelve matters:

Proprieties connected with the birth of children:

a) A man should not be too overjoyed at getting a boy, nor unduly sad at getting a girl. b) Giving the Call to Prayer in the baby's ear. c) A fine name should be given, as something to which the child has a right. d) The 'aqiqa [customary sacrifice of sheep]. e) Rubbing the child's palate.

In divorcing a wife, the husband must observe the following four points:

a) He should divorce her during a period of inter-menstrual purity, in which he has not copulated with her. b) He should confine himself to a single repudiation pronouncement, and not use a three-in-one formula. c) He should be gentle in giving his reasons for repudiating her. d) He should not reveal secrets about his wife, no more after a repudiation than during the marriage itself.

2. Rights of the husband.

The wife owes her husband absolute obedience in whatever he may demand of her, where she herself is concerned, as long as no sin is involved. We find many traditions emphasizing the husband's right over his wife.

Brief summary of the proprieties to be observed by a wife.

Muhtar Holland was born in 1935, in the ancient city of Durham in the North East of England. This statement may be considered anachronistic, however, since he did not bear the name Muhtar until 1969, when he was moved by powerful experiences in the latihan kejiwaan of Subud-to embrace the religion of Islam.