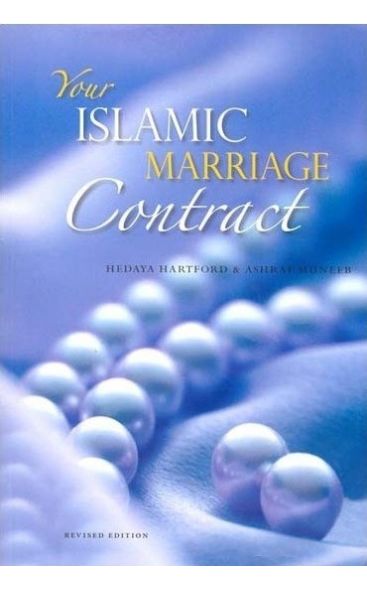 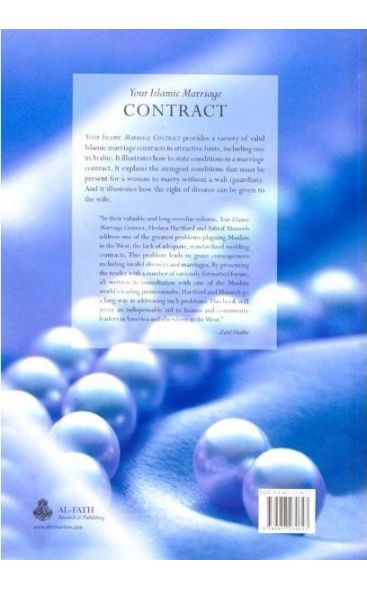 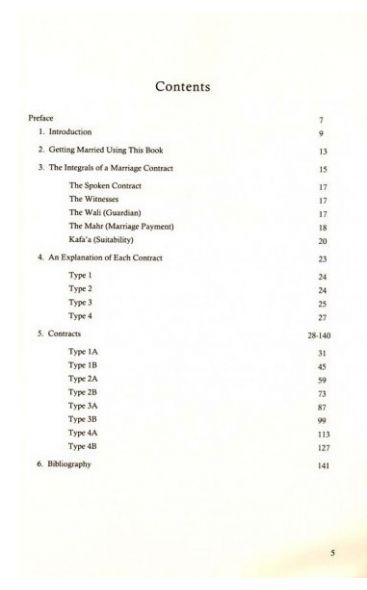 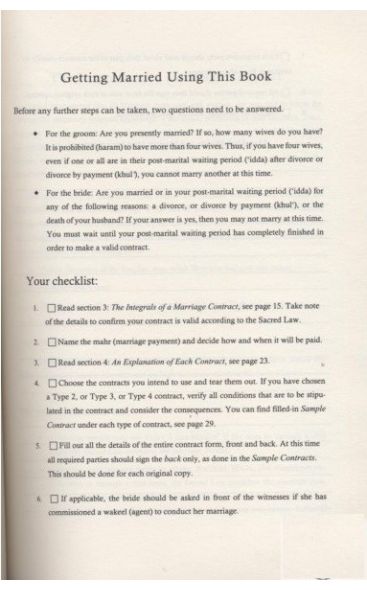 This book is an explanation of various types of valid contracts made convenient. The contracts have been certified by Shaykh Hassan Al-Hindi of Damascus.

A Gift For Nikah

This book is an explanation of various types of valid contracts made convenient. The contracts have been certified by Shaykh Hassan Al-Hindi of Damascus. They should be torn out and used as they are, since a change in the wording of Type 2, Type 3, or Type 4 contract may cause the stipulations to be nullified.

A vast amount of useful information regarding the legal measures of the marriage contract. Along with sincere advice on taking protective measures on having a written contract, and registering it legally according to the country of the state is explained.

Finally, each contract, after its explanation is presented in one Arabic and 3 English fonts, providing a variety of originals for the bride and groom.

Perfect for anyone planning to be married, already married, or for mosques and Islamic Centers. Nothing of its kind has ever been written in English.

“In their valuable and long overdue volume, Your Islamic Marriage Contract, Hedaya Hartford and Ashraf Muneeb address one of the greatest problems plaguing Muslims in the West; the lack of adequate, standardized wedding contracts. This problem leads to grave consequences including invalid divorces and marriages. By presenting the reader with a number of variously formatted forms, all written in consultation with one of the Muslim World’s leading jurist consults, Hartford and Muneeb go a long way in addressing such problems. This book will prove an indispensable aid to Imams and Community leaders in America and elsewhere in the West.”
- Zaid Shakir

Ustadha Hedaya Hartford is known for her Sharia expertise on women’s issues regarding the fiqh of menstruation, lochia, marriage, divorce, and modern social issues. Born and raised in California, she holds a Bachelors of Arts in Arabic and Islamic History & Culture from the University of California, Berkeley. She converted to Islam in 1981.

In 2006, he received his MA in Islamic Studies (Problems in Family Law for Muslims in the United States) with honors from Imam al-Ouzai, Beirut, and in 2008, his Ph.D. with distinction in Islamic Studies (Effects of Family Law on Muslims in the United States). With his wife, Hedaya Hartford, he has co-authored Your Islamic Marriage Contract; a critical edition and commentary of Risala al-Birgivi in Arabic; and Birgivi’s Manual Interpreted in English.

Dr. Ashraf was recognized in 2010 as a certified Shariah auditor and advisor by the Accounting and Auditing Organization for Islamic Financial Institutions (AAOIFI). This is the highest certificate given by AAOIFI, the most notable authority in the field of Islamic finance.

He currently lives in Amman, where he is studying Hanafi fiqh with Shaykh Ahmad al-Jammal and teaching local courses.