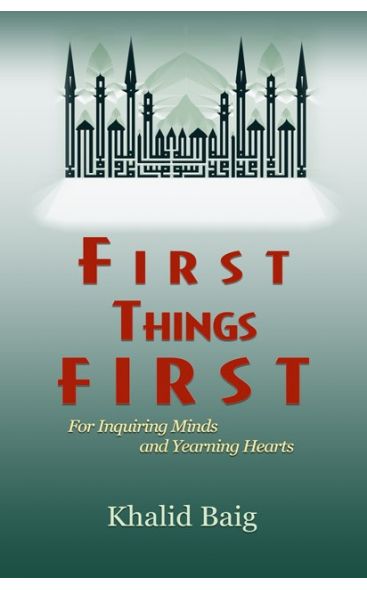 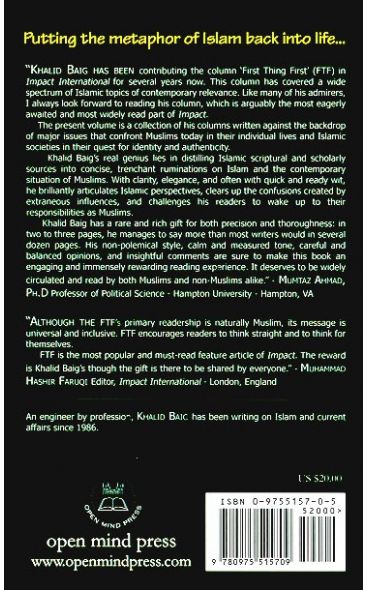 This book is a collection of popular thought-provoking articles on Islam.

Muhammad Iqbal : Essays on the Reconstruction...

War and Peace in Islam: The Uses and Abuses of...

This book is a collection of popular thought-provoking articles on Islam. Many issues are covered, including beliefs, practices, self reform, education, women, and other contemporary issues.

Distilling the wisdom of great scholars of Islam, these articles present Islam without apology.

The articles, which were originally published in the "First Things First" column of Impact International, have been thoroughly revised and updated with insertion of Qur'an and Hadith text and references. They are now being presented for the first time in book format, ideal for reading and sharing with others.

The book has been published in arrangement with the Jamiatul Ulama of South Africa.

"Several features make the book an immensely rewarding read. First and foremost, it is not a sermon from a pulpit. It is not a scholarly dissertation, either. It is just plain talk, discussion, debate, answering frequently asked questions — such as encounters with the western civilization and culture triggers in the immigrant Muslims’ minds — and raising new ones for the reader to reflect upon. The style often takes the form of a short story: 'As Muslim governments took legitimacy from the concept of nation-state, they owed allegiance to it also... In the halls of power, the ummah died.'

"Comparison of Islamic precepts with the state of the western society adds an edge to the author’s assertions. Arguments are put across forcefully and convincingly.

"Profuse references to books, people and events besides anecdotes have further enriched the book as a source of valuable information. You may not agree with all that Khalid Baig says, but you cannot resist the urge to read this book."
-Dawn

"Rarely does an Islamic book arrest the attention of the non-scholarly fraternity of South Africa in such a manner as did Khalid Baig’s First Things First. Within a few days, our entire stocks were depleted by not only enthusiastic readers, but readers who purchased additional copies to distribute to others in order to share their enlightening and thought-provoking experience.

"Baig has skillfully presented the timeless teachings of Islam to a western audience - Muslim as well as non-Muslim, - in a way that appeals to a mindset used to receiving information in a non-debating, non-sermonizing and non-academic style. The overall effect of this is that practicing Islam in a western society becomes meaningful, one is not overawed by the glamour of modernization which Baig manages to deconstruct and expose its hypocritical side, and one’s desire to practice Islam in seemingly difficult situations becomes non-intimidating.

"This book has restored the confidence of the ummah in Islam. It questions stereotypes and idiosyncrasies, removes the blinkers from our eyes using simple logic, and compels the reader to ponder the situation in a way that is difficult to ignore. Above all, the articles are in digestible bits and one is left energized and wonderstruck after reading any article. I pray that Allah Ta‘ala accepts this work. It should be introduced as extracurricular reading for students attending universities, Muslim schools and madrasahs.”
- Maulana ‘Abbas ‘Ali Jeena, President, Council of Muslim Theologians (Jamiatul ‘Ulama)

"Our age has greater access than ever before to information, ideas and opinions. The Internet allows for dissemination more than ever before, but paradoxically much less information is assimilated. People seem to have much shorter attention spans and seem to avoid anything except brief “sound-bites.” This collection finds a very happy medium between scholarly work and shallow quick phrases. There is sufficient information to allow an understanding of some depth and to point to aspects which could encourage further research.

"Islam is often the focus of detailed questioning by many people. Some people do examine Islam and Muslims to find flaws or to reinforce their prejudices, but many more examine it to seek knowledge. This collection encapsulates a broad range of topics. The reader can learn about Islam and its fundamentals as well as considering more contentious issues. It does not aim at controversy, but provides information about issues that require information and answers. There are essays on many current topics. The few mentioned here give an idea:

• “Women's Rights. An Islamic Declaration”
• “The Crusade against Hijab: Then and Now”
• “On Extremism”

"But the essays do not deal only with current and political issues. The book strongly stresses moral foundations and the importance of living lives according to Islamic teachings. And we should always see what good we can do:

"Helping a destitute person with a small amount of money or just some kind words, greeting a stranger, visiting the sick, joining in the funeral, consoling someone going through difficulty, removing something harmful from the path, making a quiet prayer for someone in need of help, forgiving a person who has hurt us - none of these will make headlines but all of them can bring about a major change in our lives."

"I strongly urge you to read the book. It is designed in a way that allows it to be read in short snatches. Consider the arguments and where possible, put these ideas into practice,

"May Allâh Ta’âla bless the writer, the reader and all those who contributed in making this valuable book and information available. May He include all of us among His sincere and pious servants."
- Moulana Shabbir Ahmed Saloojee, Principal of Darul Uloom Zakariyya, Johannesburg

“Khalid Baig has been contributing the column ‘First Things First’ in Impact International for several years now. This column has covered a wide spectrum of Islamic topics of contemporary relevance, ranging from Islamic beliefs and practices to issues of Islam and politics, culture, media, tradition and modernity, and international affairs. Like many of his admirers, I always look forward to reading his column, which is arguably the most eagerly awaited and most widely read part of Impact.

“The present volume is a collection of his columns written against the backdrop of major issues that confront Muslims today in their individual lives and Islamic societies in their quest for identity and authenticity. Throughout, he is unequivocally committed to the integrity of pristine Islamic teachings. His guides in his intellectual journey to find answers for the problems facing Muslims today are the Qur’an, the Sunnah of the Prophet, Sall-Allahu alayhi wa sallam, and the consensus of the community of Islamic scholars. His real genius lies in distilling Islamic scriptural and scholarly sources into concise, trenchant ruminations on Islam and the contemporary situation of Muslims. With clarity, elegance, and often with quick and ready wit, Khalid Baig brilliantly articulates Islamic perspectives, clears up the confusions created by extraneous influences, and challenges his readers to wake up to their responsibilities as Muslims.

“Khalid Baig has a rare and rich gift for both precision and thoroughness: in two to three pages, he manages to say more than most writers would in several dozen pages. His nonpolemical style, calm and measured tone, careful and balanced opinions, and insightful comments are sure to make this book an engaging and immensely rewarding reading experience. It deserves to be widely circulated and read by both Muslims and non-Muslims alike.”
- Mumtaz Ahmad, Ph.D Professor of Political Science - Hampton University - Hampton, VA

“Although the FTF’s primary readership is naturally Muslim, its message is universal and inclusive. FTF encourages readers to think straight and to think for themselves.

"FTF is the most popular and must-read feature article of Impact. The reward is Khalid Baig’s though the gift is there to be shared by everyone.”
- Muhammad Hashir Faruqi Editor, Impact International - London, England

An engineer by profession, Khalid Baig has been writing on Islam and current affairs since 1986. He is editor of Albalagh E-Journal as well as a regular contributor to Impact International.