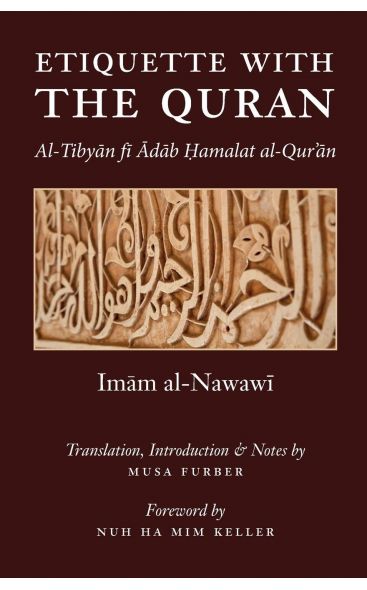 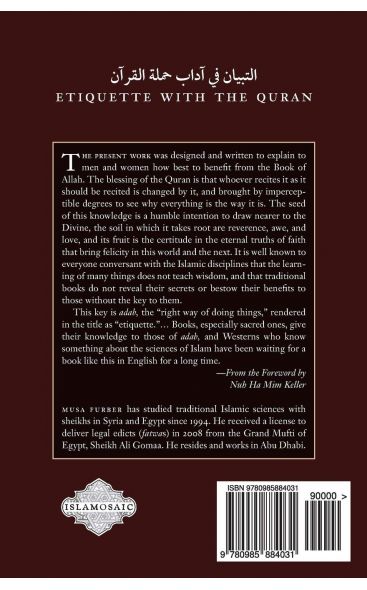 Etiquette with the Quran

Starlatch presents an enduring classic work (composed by the illustrious Imam al-Nawawi) on the etiquette that a Muslim should have with regard to handling, teaching, studying, respecting, and reciting the Quran.

Starlatch presents an enduring classic work (composed by the illustrious Imam al-Nawawi) on the etiquette that a Muslim should have with regard to handling, teaching, studying, respecting, and reciting the Quran.

The topics this volume raises include: ritual cleanliness, opportune times for recitation, the etiquette that students have with their teachers (and that teachers must have with their students), and a variety of other issues that every Muslim should know and often ask about.

Abu Zakaria Mohiuddin Yahya Ibn Sharaf al-Nawawi (1233–1277), popularly known as al-Nawawi, an-Nawawi or Imam Nawawi (631–676 A.H. / 1234–1277 CE), was a Sunni Muslim author on Fiqh and Hadith. His position on legal matters is considered the authoritative one in the Shafi'i Madhhab. He was born at Nawa near Damascus, Syria. As with many Arabic and Semitic names, the last part of his name refers to his hometown.

He studied in Damascus from the age of 18 and after making the pilgrimage in 1253 he settled there as a private scholar. From a young age he showed signs of great intelligence, and so his father paid for a good education. As a judge, he was much sought after for advice and adjudication of disputes.

During his life of 45 years he wrote many books on Islamic studies and other topics. He collected and sourced 42 Hadith of the Islamic prophet, Mohammed back to one of his companions.

In 1267 he succeeded Abu Shama as professor of Hadith at the Ashrafiyya [school] in the city. He died at Nawa at a relatively young age, having never married.

Musa Furber was born in Massachusetts and raised in Portland, Oregon. He majored in linguistics at Portland State University, with an emphasis on computational linguistics and cognitive science, a major that required him to study a non-Indo-European language. As good fortune would have it, Arabic was the only class that fit in his schedule at the time, thus starting him off on what eventually would become a serious and personal study of the Quran and Islam.

Musa embraced Islam and shortly thereafter embarked on a path of learning. While still a student in Portland, he studied Shafii fiqh with a scholar who was in Portland at the time. After graduating from college, Musa went to Damascus to further his Arabic studies. After a one-year return to the U.S., Musa again traveled to Damascus where he completed an intensive four-year study of the traditional sciences of Islam (hadith, Quran, fiqh, advanced Arabic grammar, biography of the Prophet (peace and blessings be upon him), and more).

After graduation, he continued his studies with scholars in and around Damascus. He has studied several important texts and is qualified to translate and teach them. Musa now resides in a small village outside of Damascus with his wife and three children. Excerpt From the Foreword of Sh. Nuh Ha Mim Keller: The present work was designed and written to explain to men and women how best to benefit from the Book of Allah. The blessing of the Quran is that whoever recites it as it should be recited is changed by it, and brought by imperceptible degrees to see why everything is the way it is….

It is well known to everyone conversant with the Islamic disciplines that the learning of many things does not teach wisdom, and that traditional books do not reveal their secrets or bestow their benefits to those without the key to them. This key is adab, the “right way of doing things,” rendered in the title as “etiquette.”… Books, especially sacred ones, give their knowledge to those of adab, and Westerners who know something about the sciences of Islam have been waiting for a book like this in English for a long time.