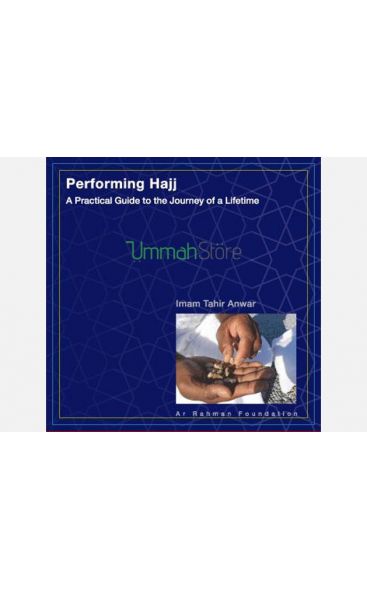 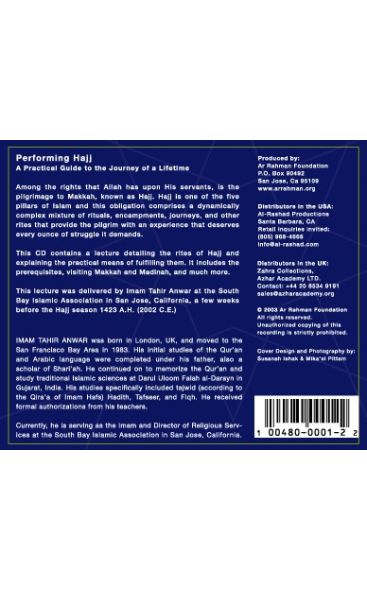 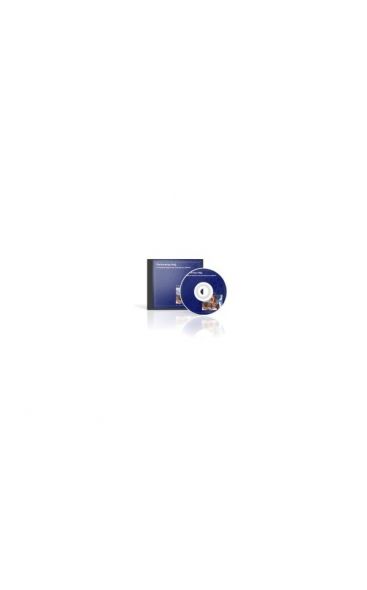 This CD contains a lecture detailing the rites of Hajj and explaining the practical means of fulfilling them.

Pilgrimage in Islam: Traditional and Modern...

Among the rights that Allah has upon His servants, is the pilgrimage to Makkah, known as Hajj. Hajj is one of the five pillars of Islam and this obligation comprises a dynamically complex mixture of rituals, encampments, journeys, and other rites that provide the pilgrim with an experience that deserves every ounce of struggle it demands.

This CD contains a lecture detailing the rites of Hajj and explaining the practical means of fulfilling them. It includes the prerequisites, visiting Makkah and Madinah, and much more. This lecture was delivered by Imam Tahir Anwar at the South Bay Islamic Association in San Jose, California, a few weeks before the Hajj season 1423 A.H. (2002 C.E.)

Imam Tahir Anwar (born February 25, 1978, London, England) is a scholar currently residing in the San Francisco Bay Area. His family moved to the area in 1983. He received basic religious education with his father, Anwar Patel,. Tahir Anwar left in 1991 to attend a traditional Islamic University (madarassa) in Gujrat, India known as Falah ud Darayn. He is Hafiz, has a B.A. in Islamic Theology and has completed many other advanced courses in Islamic studies, earning him the title of Alim or scholar.

Until recently, he served as Imam and Director of Religious Services at South Bay Islamic Association until November 21, 2014 when he resigned. He is also the head of the Islamic Studies Department, and an Islamic Studies teacher at Granada Islamic School, which is attached to the Muslim Community Association of Santa Clara County. Anwar has been leading a group to perform Hajj for several years, with CNN twice covering this pilgrimage. He also sits on Zaytuna College's Management Committee, Averroes High School's Board of Directors as well as other panels and boards.

He is frequently invited to speak at community forums, various universities and religious institutions. He has also traveled to many different countries, and is fluent in English, Urdu, Arabic, Hindi, and Gujarati languages. He is married and has two sons. Anwar resigned from the South Bay Islamic Association as Director of Religious Services on November 21, 2014, citing personal reasons. He continues to reside in the San Francisco Bay Area.