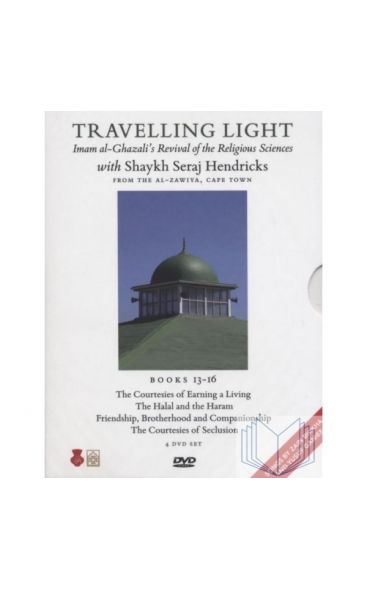 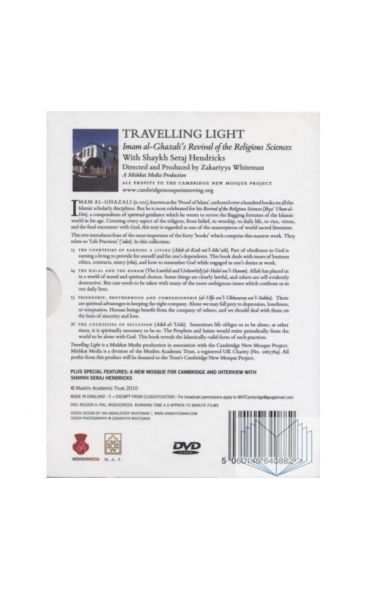 Mishkat Media presents Travelling Light - the timeless spiritual wisdom of Imam al-Ghazali's The Revival of the Religious Sciences (Ihya 'ulum al-din), brought alive for today by the teaching of leading scholars of the Muslim community.

Lectures on this Islamic classic are now available accompanied by beautiful films shot at historic sites around the Muslim world, among the communities nourished by the teachings of the Imam. Each film also includes examples of the sacred music local to the setting.

The inspirational insights and blessings of the Imam's work are not the only benefit of this project. All profits go to support the building of the new mosque in Cambridge.

Imam Al-Ghazali (d.1111), known as the ‘Proof of Islam’, authored over a hundred books on all the Islamic scholarly disciplines. But he is most celebrated for his Revival of the Religious Sciences (Ihya’ Ulum al-Din), a compendium of spiritual guidance which he wrote to revive the flagging fortunes of the Islamic world in his age. Covering every aspect of the religion, from belief, to worship, to daily life, to vice, virtue, and the final encounter with God, this text is regarded as one of the masterpieces of world sacred literature.

13 The Courtesies Of Earning A Living

14 The Halal And The Haram

16 The Courtesies of Seclusion

Released February 2010 LOCATION These lectures were delivered in the historic Al-Zawiya mosque on the slopes of Table Mountain in Cape Town. The founder of the mosque, Shaykh Muhammad Salih Hendricks, was born in Swellendam in 1877. He studied in Makkah under Shaykh Muhammad Shatttah and Shaykh Umar Ba-Junayd. After fifteen years of study in the Holy City, in 1902 he left for Zanzibar, where he worked giving fatwas and judgements, before returning to Cape Town in 1903. In Cape Town he occupied himself with calling people to Islam, strengthening the hijab and other Muslim traditions. In 1919 he began work building the Al-Zawiya Mosque, on a site between the districts of Walmer Estate and Zonnebloem. He established the tradition of teaching Imam al-Ghazali’s Ihya Ulum al-Din, which continues on Tuesday nights at the mosque to this day. The Al-Zawiya Mosque is also a madrasa which has produced generations of students who work as imams in Cape Town and beyond. Qur’anic Recitation by Hafiz Binyameen TOEFEE. This series includes four new songs led by leading Cape singer YUSUF GANIEF, plus exclusive extracts from the Al-Zawiya Mosque Singer’s celebrated rendering of the Mawlid al-Barzinji. Disc 13 includes an interview with Shaykh Seraj, in which he talks about the history of the Al-Zawiyah, the heroic history of Islam in the Cape, and his personal experiences under apartheid. LECTURE SUMMARY 13 THE COURTESIES OF EARNING A LIVING (Adab al-Kasb wa’l-Ma‘ash). Part of obedience to God is earning a living to provide for oneself and for one’s dependents. This book deals with issues of business ethics, contracts, usury (riba), and how to remember God while engaged in one’s duties at work. 14 THE HALAL AND THE HARAM (the lawful and unlawful) (al-Halal wa’l-Haram). Allah has placed us in a world of moral and spiritual choices. Some things are clearly lawful, and others are self-evidently destructive. But care needs to be taken with many of the more ambiguous issues which confront us in our daily lives. 15 FRIENDSHIP, BROTHERHOOD AND COMPANIONSHIP (al-Ulfa wa’l-Ukhuwwa wa’l-Suhba). There are spiritual advantages in keeping the right company. Alone we may fall prey to depression, loneliness, or temptation. Human beings benefit from the company of others; and we should deal with them on the basis of sincerity and love. 16 THE COURTESIES OF SECLUSION (Adab al-‘Uzla). Sometimes life obliges us to be alone; at other times, it is spiritually necessary to be so. The Prophets and Saints would retire periodically from the world to be alone with God. This book reveals the Islamically-valid form of such practices.

Shaykh Seraj Hendricks is the grandson of Shaykh Muhammad Salih Hendricks. He has studied at the Al-Zawiya and at Umm al-Qura University in Makkah. He has served as the Chair of the Fatwa Committee of Cape Town, and is currently Imam of the Al-Zawiyah Mosque. He was imprisoned by the former apartheid regime for his activism.