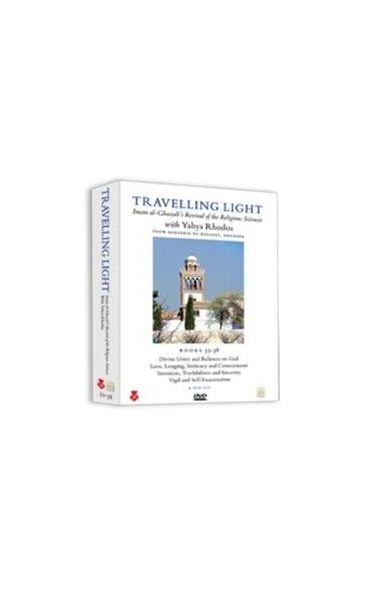 The inspirational insights and blessings of the Imam's work are not the only benefit of this project.

Mishkat Media presents Travelling Light - the timeless spiritual wisdom of Imam al-Ghazali's The Revival of the Religious Sciences (Ihya 'ulum al-din), brought alive for today by the teaching of leading scholars of the Muslim community.

Lectures on this Islamic classic are now available accompanied by beautiful films shot at historic sites around the Muslim world, among the communities nourished by the teachings of the Imam. Each film also includes examples of the sacred music local to the setting.

​The inspirational insights and blessings of the Imam's work are not the only benefit of this project. All profits go to support the building of the new mosque in Cambridge. BOOKS 23-26

24. The Vices of the Tongue

26. On Worldliness To be released June 2011 - Running Time approx. 75 mins x 4 - English DVD Region 0 - PAL Widescreen - E = Exempt from classification Summary: 23. Breaking the Two Desires (Kasr al-Shahwatayn) Humans love God by their nature, but they are also weak when confronted by two powerful passions: gluttony and sexual desire. The Imam shows how to control these, and how to deal with one's natural appetites in a wholesome and balanced way. 24. The Vices of the Tongue (Afat al-Lisan) The tongues is small, but can lead to immense calamities. Here spiritual guidance is offered on how to confront our habits of lying, slander, self-praise, mockery, obscenity, backbiting and bearing false witness. 25. Anger, Hatred & Envy (Dhamm al-Ghadab wa'l-Hiqd wa'l-Hasad) Discusses rightful and egotistical anger, and the forms of ugly dislike and envy of others and their good fortune, stressing the value of mildness and the forgiveness of others. 26. On Worldliness (Dhamm al-Dunya) The world is Allah's creation, and as such is a sign of His goodness. But human beings all too easily love it for its own sake, and gorge themselves on pleasures which are of no benefit to their spiritual and moral lives. The result is a heart filled with stress and jealousy, rather than serene gratitude.

This series also features an interview with Serigne Cheikhouna Lo N'Gabou, director of the Ibrahim Lo Foundation for Islamic Education in Touba, Senegal and author of several books, including the major Wolof translation of the Qur'an. He is a direct descendent of Shaykh Ahmadou Bamba and an authority on the history of Islamic literature in Senegal.

The Qur'anic recitation for this series was by Qari Djibril Ndaw.

About The Speaker The lectures are by Sidi Muhammad Adeyinka Mendes. Born in the United States in 1975, Muhammad embraced Islam after a life-changing journey to Israel in 1992 and has studied in America, Syria, Mauritania and Nigeria.

He currently serves as an imam and instructor of Arabic and Islamic Studies at the Risala Institute in Atlanta.