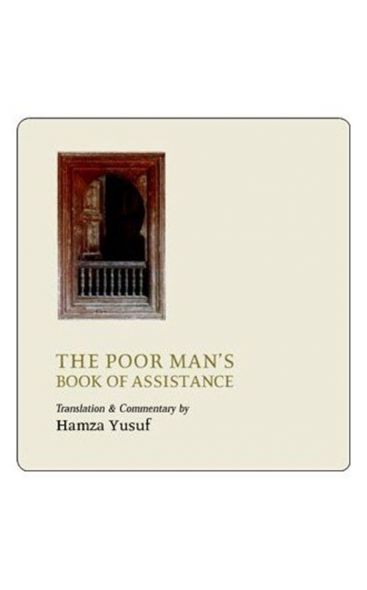 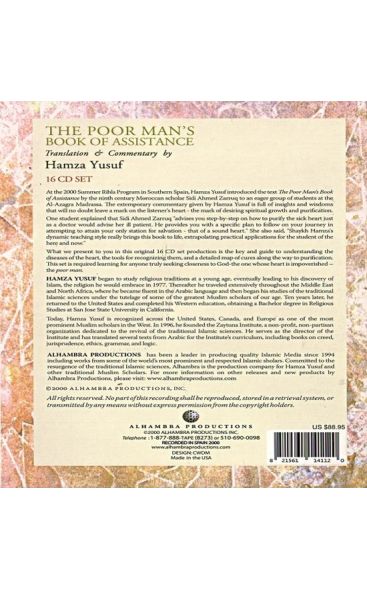 This 16 CD set production is the key and guide to understanding the diseases of the heart, the tools for recognizing them, and a detailed map of cures along the way to purification.

At the 2000 Summer Rihla Program in southern Spain, Hamza Yusuf introduced the text The Poor Man's Book of Assistance by the ninth century Moroccan scholar Sidi Ahmed Zarruq to an eager group of students at the Al-Azzargra Madrassa. The extemporary commentary given by Shaykh Hamza is full of insights and  that will no doubt leave a mark on the listener's heart -- the mark of desiring spiritual growth and purification.

​One student explained that Sidi Ahmed Zarruq "advises you step by step on how to purify the sick heart just as a doctor would advise her ill patient. He provides you with a specific plan to follow on your  in attempting to attain your only station for salvation -- that of a sound heart." She also said, "Shaykh Hamza's dynamic teaching style really brings this book to life, extrapolating practical applications for the student of the here and now."

What we present to you in this original 16 CD set production is the key and guide to understanding the diseases of the heart, the tools for recognizing them, and a detailed map of cures along the way to purification. This set is required learning for anyone truly seeking closeness to God -- the ones whose heart is impoverished -- the poor man.

Hamza Yusuf began to study religious traditions at a young age, eventually leading to his discovery of Islam, the religion he would embrace in 1977. Thereafter he traveled extensively throughout the Middle East and North Africa, where he became fluent in the Arabic language and then began his studies of the traditional Islamic sciences under the tutelage of some of the greatest Muslim scholars of our age. Ten years later, he returned to the United States and completed his Western education, obtaining a Bachelor degree in Religious Studies at San Jose State University in California.

Today, Hamza Yusuf is recognized across the United States, Canada, and Europe, as one of the most prominent Muslim scholars in the West. In 1996, he founded the Zaytuna Institute, a -, non-partisan organization dedicated to the revival of traditional Islamic sciences. He serves as the director of the Institute and has translated several texts from Arabic for the Institute's curriculum, including books on creed, jurisprudence, ethics, grammar, and logic.

Hamza Yusuf resides in the Greater Bay Area of San Francisco with his wife and four children.