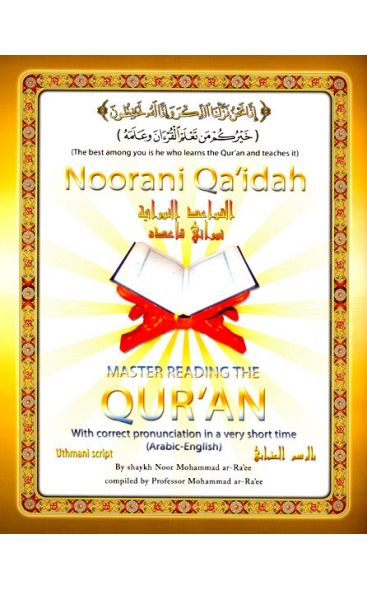 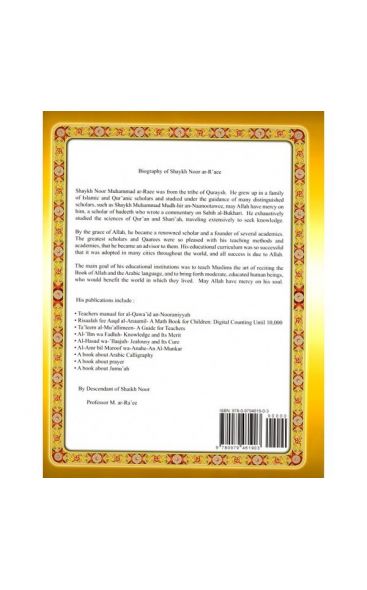 Mastering the art of Qur'anic recitation and rules of Tajweed is no easy task for any Muslim, particularly if Arabic is not his or her native language.

Mastering the art of Qur'anic recitation and rules of Tajweed is no easy task for any Muslim, particularly if Arabic is not his or her native language. This well-known program, Noorani Qaidah, a staple of Tajweed students for over 20 years, has been proven immensely successful throughout the world due to its incredibly proven effective and comprehensive methodology. Numerous prominent Qaris (reciters of the Holy Qur'an) have used this program with great success. Millions more have taken the lessons and learned how to read the Qur'an quickly and thoroughly. The ease in which the Tajweed rules are taught makes this the ideal method for any Muslim to learn how to read and recite the Qur'an in record time. What's more, you don't need to know a word of Arabic in order to master this program, yet when you're finished with it, you will be able to read and recite the Qur'an from cover to cover.

What will you learn? The most important thing you will take away from this Nurani Qaaidah program is a solid practical mastering of the rules of Tajweed, including makhaarij (the place the letter sounds exit from your mouth) that will enable you to read the Qur'an correctly on your own. In fact, many graduates of this program have been able to read the Qur'an correctly with precision and ease from cover to cover in six months or less. This program follows an easy gradient systematic system from beginner's level to intermediate to advanced. It starts with Arabic alphabet and small connected letters and harakat, short vowel, long vowels, words, then sukoon, then shaddah, sentences from the Qur'an, application of Tajweed, then that which need to be observed for Hafs. Each of the eighteen lessons is designed for simplicity and ease of assimilation and takes one hour or less to complete without ever burdening the student.

Who will teach you? Your teacher will be Sheikh Mohammed ar-Ra'ee, whose grandfather Sheikh Noor wrote the book this program uses, an expert Qari and has taught Tajweed classes and recitation for over 20 years to students ranging from preschoolers to unviersity students and adults. He holds over five Ijaazahs (certifications) from Qaris with a chain of authentication dating back to the Prophet Muhammad (PBUH). Some of his teachers include Sheikh Hudaify, Ibraheem Al-Akhdar, Mohammad Tamim Azu'bi (Madina), Fath Muhammad (east Asia), Syed Laacheen, - Abdurrasheed Ar-Ra'ee - Ahmad ahmad said, mohammad ahmed ma'bad, Abdurrahim Al-Ilmi The Student of Sheikh Ahmad Zayaat (of Egypt) include Sheikh Abdel Aziz Uyoon as-Sood through Sheikh Mohammed Tamim Azu'bi (Shaam). He has designed and participated as a judge in several Qur'an competitions for ISNA and GQMA (Global Qur'an Memorization Academy). Many of his former students rank in the top 10 in many international Qur'anic competitions held in such places such as Mecca, Medina and Dubai. One in particular, Sheikh Abdullah Awwaad Al-Juhany, is currently the Imaam at the Masjid Al-Haram in Makkah.

What will you get? - Nurani Qaeedah comes with one textbook with color coded text, lessons notes, summaries, exercises, Tajweed charts, and illustrations for Makhaarij for Tajweed Rules. All the Practice words and sentences used in the textbook are only from the Qur'an. - The Arabic script used in this textbook follows the Uthmani font as handwritten by the renowned calligrapher Uthman Taha who penned the Quran Mushaf al-Madina King Fahd Quranic complex - 5 Cd's filled with eighteen lessons, practice surahs, and exercises; each is simple to understand, easy to complete, and gradually builds on previous lessons learned.

Who recommends this program? This program has been highly recommended by important figures in the field of Qur'anic studies. These include Sheikh Abdullah Basfar, the director of International Qur'an Memorization Association; Sheikh Dr. Ayman Assuaid, the renowned student of Uyoon as-Sood; Sheikh Dr. Lewis Faisal Bali, the former head of the Islamic Department in the Sauid Armed Forces; Shekih Abdel-Aziz Al-Hanafee, the director of Glorious Qur'an Memorization Association in Jeddah; Sheikh Dr. Ali Badahdah, the Imaam and Professor at the King Aziz University. Jeddah; Sheikh Abdul-Malik Sultan, Professor of Ummu Al-Qura University in Makkah; and Sheikh Ta Ha, Teacher of Qur'an at Masjid al-Haram in Makkah.