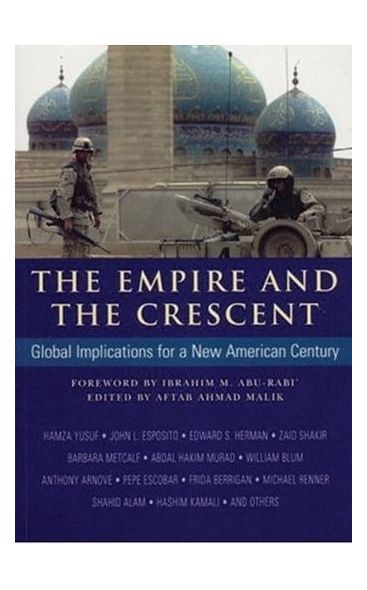 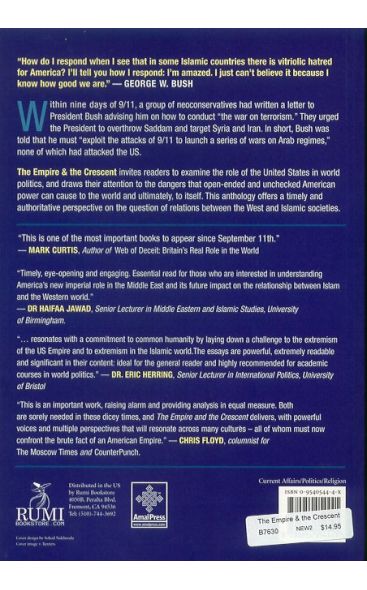 Empire and the Crescent: The Global Implications for a New American Century

The Empire & the Crescent invites readers to examine the role of the United States in world politics and draws their attention to the dangers that open-ended and unchecked American power can cause to the world and ultimately, to itself.

Renovatio: Those With Authority Among You -...

Renovatio: Suffering As Surrender - Vol.4 No.1

The Tradition of the Scholars of Deoband:...

Timely, eye-opening and engaging. Essential read for those who are interested in understanding America's new imperial role in the Middle East.

The Empire & the Crescent invites readers to examine the role of the United States in world politics, and draws their attention to the dangers that open-ended and unchecked American power can cause to the world and ultimately, to itself.

With contributions from Hamza Yusuf, William Blum, Zaid Shakir, Edward Sherman, Barbara Metcalf, Abdal Hakim Murad and other eminent scholars and experts, this anthology offers a timely and authoritative perspective on the question of relations between the West and Islamic societies.

Dr. Aftab Ahmad Malik is an editor and author of The Broken Chain: Reflections upon the Neglect of a Tradition. His articles have appeared in a number of newspapers and magazines including, the BBC, The Muslim Weekly, and The Arab News. Ibrahim M. Abu Rabi' is a professor of Islamic studies and Christian-Muslim relations at Hartford Seminary in Hartford, Connecticut. He is also the co-editor of The Muslim World and the author of Intellectual Origins of Islamic Resurgence in the Modern Arab World.

Ibrahim M. Abu-Rabi‘ (1956-2011) was Professor and Edmonton Council of Muslim Communities Chair in Islamic Studies in the Department of History and Classics at the University of Alberta, Edmonton, Canada. His primary areas of academic specialization were the Middle East and International Relations.

Prof. Abu-Rabi‘ earned his Ph.D. in Islamic Studies, with concentrations in Modern Islamic Thought and Comparative Islamic Cultures, from the Temple University Department of Religion in 1987. His dissertation was entitled, “Islam and Search for Social Order in Modern Egypt: An Intellectual Biography of Shaykh al-Azhar ‘Abd al-Halim Mahmud.” Prior to that, he earned a M.A. in Religious Studies from Temple University (1983) and an M.A. in Political Science from the University of Cincinnati (1982). Prof. Abu-Rabi‘ was born and attended primary and secondary schools in Nazareth, Galilee, Palestine/Israel. He was fluent in English, Arabic, Hebrew, French, German, and Turkish.

"Timely, eye-opening and engaging. Essential read for those who are interested in understanding America's new imperial role in the Middle East and its future impact on the relationship between Islam and the Western world.” —Dr Haifaa Jawad, Senior Lecturer in Middle Eastern and Islamic Studies, University of Birmingham.

"…resonates with a commitment to common humanity by laying down a challenge to the extremism of the US Empire and to extremism in the Islamic world.The essays are powerful, extremely readable and significant in their content: ideal for the general reader and highly recommended for academic courses in world politics." —Dr. Eric Herring, Senior Lecturer in International Politics, University of Bristol

"This is one of the most important books to appear since September 11th.." —Mark Curtis, Author of Web of Deceit: Britain's Real Role in the World

"As public-minded people around the globe strive to make sense of the times we are in--especially the nature and aims of American power in relation to the Middle East--this collection is an indispensable resource." —Wendy Brown, Professor of Political Science, University of California, Berkeley

"...a book that is compelling and authoritative." —BBC Religion and Ethics

"...offers a chilling insight into the neo-conservative worldview and impact their proliferating think tanks have on present US policy." —Dr Philip Lewis, Author of, Islamic Britain: Religion, Politics and Identity Among British Muslims. Inter-faith Adviser to the Bishop of Bradford and lecturer in Bradford University Department of Peace Studies

"This is one of the most important books to appear since September 11th.." —Mark Curtis, Author of: Web of Deceit: Britain's Real Role in the World

"Like their compatriots in the heartlands, it appears that Muslims in the West must, more than ever, take a double stand against the extremists in their midst and against the rise of the American hyper-power on the back of the ‘war on terrorism’, an approach admirably outlined by The Empire and the Crescent: Global Implications for a New American Century [...]" —Muslim World Book Review, 24/2, Winter 2004

"The case for urgent re-evaluation and re-formulation of American foreign policy is made very eloquently" —The Muslim News.