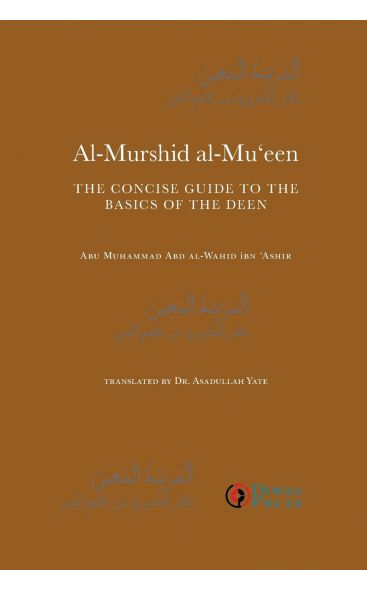 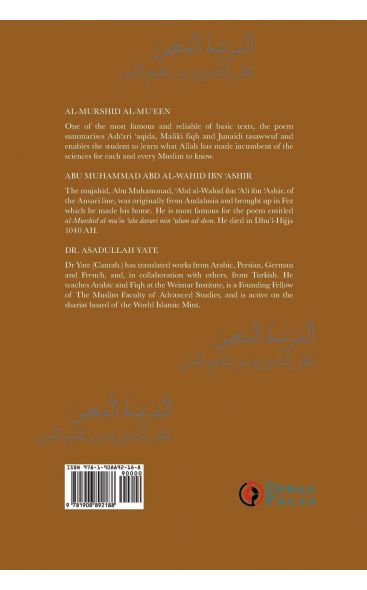 Al-Murshid al-Mu‘een: The Concise guide to the Basics of the Deen

Al-Murshid al-Mu’een – the Concise Guide to the Basics of the Deen – is a widely recognised primary text for learning Islam in North Africa. In it the author, Abd al-Wahid ibn ‘Ashir, summarises in verse the three sciences of Islam, Iman and Ihsan.

Al-Murshid al-Mu’een – the Concise Guide to the Basics of the Deen – is a widely recognised primary text for learning Islam in North Africa. In it the author, Abd al-Wahid ibn ‘Ashir, summarises in verse the three sciences of Islam, Iman and Ihsan: Maliki fiqh, Ash’ari ‘aqida and Junaidi tasawwuf.

This is its first complete translation into English. Dr. Asadullah Yate is also the translator of Shaykh Ahmad bin al-Bashir al-Qalawi ash-Shinqiti’s (1216 AH/1802 CE- 1276 AH/1853 CE) Mufid al-‘Ibad, a very full commentary on al-Murshid al-Mu‘een, which is published by Diwan Press in English as Islam in the School of Madina.

Ordinarily students of Maliki fiqh begin by learning the Mukhtasar al-Akhdari before studying the Murshid, after which they will proceed to the Risalah of Ibn Abi Zayd al-Qayrawani, which in addition to the Murshid’s study of the acts of worship also has mu‘amalat and a great deal more.

Shaykh Abd al-Wahid ibn ‘Ashir: The great imam, the sea of knowledge, he who made the hajj from the most distant land (abarr), the mujahid, Abu Muhammad, ‘Abd al-Wahid ibn ‘Ali ibn ‘Ashir, of the Ansari line, originally from Andalusia, brought up in Fez which he made his home.

He has compositions on various different sciences, amongst them the poem entitled al-Murshid al-mu’in ‘ala daruri min ‘ulum ad-deen about Maliki fiqh. It parallels the Mukhtasar of Khalil in that it combines both the roots and branches of the deen such that whoever reads it and understands its points is able to abandon once and for all taqleed – imitation – for the soundness of the iman (of the people of taqleed) is disputed.

He is thus able to learn what Allah has made incumbent on him of the sciences necessary for each and every Muslim to know. He died in Dhu’l-Hijja 1040 AH. (Ash-Shajara p.299, No. 1161)

Dr. Asadullah Yate has translated works from Arabic, Persian, German and French, and, in collaboration with others, from Turkish. He teaches Arabic and Fiqh at the Weimar Institute, is a Founding fellow of The Muslim Faculty of Advanced Studies, and is active on the shariat board of the World Islamic Mint.