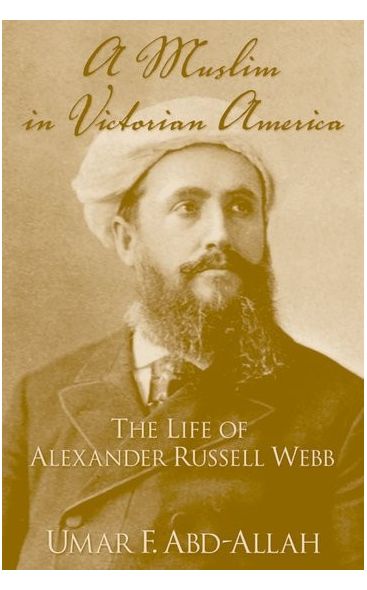 A Muslim in Victorian American: The Life of Alexander Russell Webb

Conflicts and controversies at home and abroad have led Americans to focus on Islam more than ever before.

Conflicts and controversies at home and abroad have led Americans to focus on Islam more than ever before. In addition, more and more of their neighbors, colleagues, and friends are Muslims. While much has been written about contemporary American Islam and pioneering studies have appeared on Muslim slaves in the antebellum period, comparatively little is known about Islam in Victorian America. This biography of Alexander Russell Webb, one of the earliest American Muslims to achieve public renown, seeks to fill this gap.

Webb was a central figure of American Islam during the late nineteenth and early twentieth centuries. A native of the Hudson Valley, he was a journalist, editor, and civil servant. Raised a Presbyterian, Webb early on began to cultivate an interest in other religions and became particularly fascinated by Islam. While serving as U.S. consul to the Philippines in 1887, he took a greater interest in the faith and embraced it in 1888, one of the first Americans known to have done so. Within a few years, he began corresponding with important Muslims in India. Webb became an enthusiastic propagator of the faith, founding the first Islamic institution in the United States: the American Mission. He wrote numerous books intended to introduce Islam to Americans, started the first Islamic press in the United States, published a journal entitled The Moslem World, and served as the representative of Islam at the 1893 World's Parliament of Religions in Chicago. In 1901, he was appointed Honorary Turkish Consul General in New York and was invited to Turkey, where he received two Ottoman medals of merits.

In this first-ever biography of Webb, Umar F. Abd-Allah examines Webb's life and uses it as a window through which to explore the early history of Islam in America. Except for his adopted faith, every aspect of Webb's life was, as Abd-Allah shows, quintessentially characteristic of his place and time. It was because he was so typically American that he was able to serve as Islam's ambassador to America (and vice versa). As America's Muslim community grows and becomes more visible, Webb's life and the virtues he championed - pluralism, liberalism, universal humanity, and a sense of civic and political responsibility - exemplify what it means to be an American Muslim.

Umar F. Abd-Allah is the Chair and Scholar-in-Residence at the Nawawi Foundation, a non-profit educational foundation based in Chicago. Abd-Allah received his Ph.D. in Arabic and Islamic Studies from the University of Chicago in 1978.

"In this timely and engaging book, Umar Abd-Allah brings to life an important, but little-known figure in Victorian America. In an illuminating story of Alexander Webb, Abd-Allah shows how he navigated life as a prominent Muslim and an American with relative ease and without resistance from mainstream society. This work is an important lesson, not only for history buffs but for anyone interested in understanding contemporary times." --Geneive Abdo, author of Mecca and Main Street: Muslim Life in America After 9/11.

"A remarkable biography of the intriguing Alexander Russell Webb, one of the earliest American converts to Islam. Webb's efforts to plant Islam in the United States are placed in the historical context of his New York upbringing, the religious developments in Victorian America, and his travels in the Muslim world." --Yvonne Yazbeck Haddad, co-author of Muslim Women in America

"A prodigious study of one of the most important early American Muslims. Webb's tour acoss the Islamic world is captivating, and his interpretation of the faith provides a model for contemporary Islamic thought." --Jane I. Smith, author of Islam in America

"Fascinating for all Muslims and all Americans." --The Muslim World Book Review

"Given our current lack of solid information about the place of Islam in American religious history, Abd-Allah's scholarly work is really quite valuable." --H-Net

"Umar Abd-Allah's account of Webb is by far the most comprehensive...Abd-Allah's lucid and elegant prose should make the work attractive to a wide array of general readers as well as religious historians of the United States." --Journal of Religion