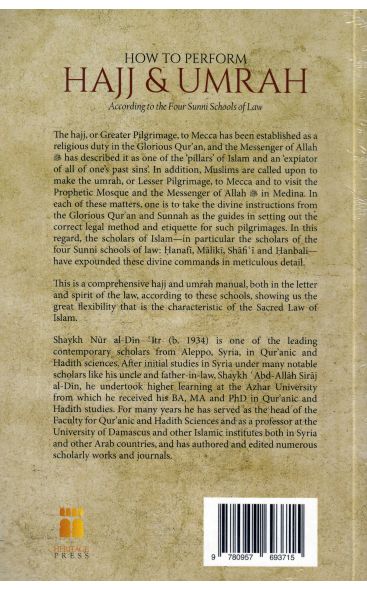 This is a comprehensive hajj and Umrah manual of instruction on how to perform these pilgrimages.

The hall, or Greater Pilgrimage, to Mecca has been established as a religious duty in the Glorious Quran, and the Messenger of Allah t has described it as one of the 'pillars of Islam and an 'expiator of all of one's past sins.' In addition, Muslims are called upon to make the umrah, or Lesser Pilgrimage, to Mecca and to visit the Prophetic Mosque and the Messenger of Allah (PBUH) in Medina.

In each of these matters, one is to take the divine instructions from the Glorious Qur'an and Sunnah as the guides in setting out the correct legal method, etiquette and spiritual values for such pilgrimages. In this re-gard, the scholars of Islam - in particular the scholars of the Four Sunni Legal Schools: Hanafi, Maliki, Shafi'i and Hanbali - have expounded the divine orders in meticulous and loving detail.

This is a comprehensive hall and umrah manual of instruction on how to perform these pilgrimages, in terms of both the letter and spirit of the law, according to these schools, that shows us the great flexibility that is the characteristic of the Sacred Law of Islam.

Du'a (supplication) has been described by the Prophet (PBUH) as the 'essence of worship' (mukhkh al-ibadah). He therefore emphatically encouraged the believers to turn to Allah in supplication, particularly in blessed times and places, as there is greater expectancy in such prayers being accepted in those circumstances. There is probably no time — other than Ramadan — more blessed than the time of hajj nor any place more blessed than the sites wherein the hajj rituals are performed.

Imam al-Nawawi relates that Hasan al-Basri (R.A) said, Supplications are answered during [hajj] on fifteen occasions [or places]: during tawaf at the Multazam, under the rain pipe (mizab), in the House [Kaaba], at the Zamzam well, on al-Safa and al-Marwah, in the say area, behind the Maqam [of Ibrahim], in (Arafah, in al-Muzdalifah and at the three sites of stoning (jamarat) in Mina. Thus deprived is the one who does not strive in supplicating therein: This booklet comprises a comprehensive collection of supplications extracted from Shaykh Nur al-Din Itr's How to perform Haj and Umrah according to the Four Sunni Schools of Law.

The majority of the supplications have been transmitted from the Prophet it, while the remainder are from the saints and scholars from his nation. One should endeavour to memorise and recite them with presence of heart; in order to facilitate such inner concentration, their translation is provided, together with a transcription to aid those who have difficulties in reading the Arabic script.

Shaykh Nur al-Din Itr (born in 1934) is one of the leading contemporary scholars from Aleppo, Syria in Qur'anic and Hadith sciences. After his initial studies in his native Syria under many notable scholars like his uncle and father-in-law Shaykh Abd-Allah Siraj al-Din, he undertook higher studies at the al-Azhar University from which he received his BA, MA and PhD in Qur'anic and Hadith studies.

For many years he has served as the head of the Faculty for Qur'anic and Hadith Sciences and as a professor at the University of Damascus and other Islamic institutes both in Syria and in other Arab countries, while also authoring and editing numerous scholarly works and journals.