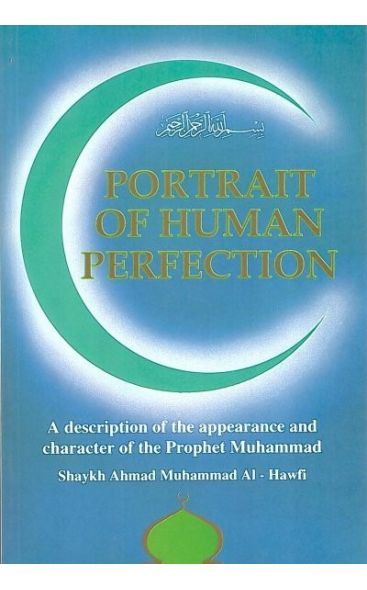 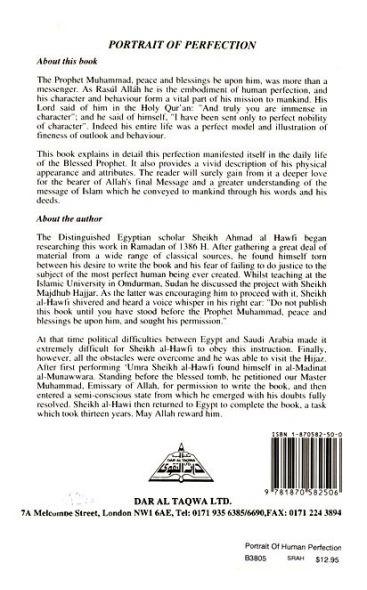 Portrait of Human Perfection: A Description of the Appearance and Character of the Prophet Muhammad

Portrait of Human Perfection, by Aisha Abdurrahman Bewley, is a detailed account of the character, behavior, and physical and spiritual attributes of the Prophet Muhammad (PBUH).

The Prophet Muhammad, peace and blessings be upon him, was more than a messenger. As Rasul Allah he is the embodiment of human perfection, and his character and behavior form a vital part of his mission to mankind.

His Lord said of him in the Holy Qur'an: "And truly you are immense in character"; and he said of himself, "I have been sent only to perfect nobility of character". Indeed his entire life was a perfect model and illustration of fineness of outlook and behavior.

This book explains in detail this perfection manifested itself in the daily life of the Blessed Prophet. It also provides a vivid description of his physical appearance and attributes. The reader will surely gain from it a deeper love for the bearer of Allah's final Message and a greater understanding of the message of Islam which he conveyed to mankind through his words and his deeds.

The Distinguished Egyptian scholar Sheikh Ahmad al Hawfi began researching this work in Ramadan of 1386 H. After gathering a great deal of material from a wide range of classical sources, he found himself torn between his desire to write the hook and his fear of failing to do justice to the subject of the most perfect human hieing ever created. Whilst teaching at the Islamic University in Omdurman, Sudan he discussed the project with Sheikh Majdhub Hajjar. As the latter was encouraging him to proceed with it. Sheikh shivered and heard a voice whisper in his right ear "Do not publish this book until you have stood before the Prophet Muhammad. peace and blessings he upon him and sought his permission."

At that time political difficulties between Egypt and Saudi Arabia made it extremely difficult for Sheikh al-Hawfi to obey this instruction. Finally, however, all the obstacles were overcome and he was able to visit the Hijaz. After first performing 'Umra Sheikh al-Hawfi found himself in al-Madinat al-Munawwara. Standing before the blessed tomb, he petitioned our Master Muhammad (PBUH). Emissary of Allah, for permission to write the book, and then entered a semi-conscious state from which he emerged with his doubts fully resolved. Sheikh then returned to Egypt to complete the book, a task which took thirteen years. May Allah reward him.

Aisha Abdurrahman Bewley born 1948 in the United States. She holds a BA in French and MA in Near Eastern Languages from the University of California, Berkeley. She spent a year with a fellowship at the American University in Cairo and at the same time attended a seminar on Sufism and Islamic philosophy at Dar al-’Ulum. She is a student of Shaykh Abdalqadir al-Murabit, and also studied Ibn ‘Arabi with the late Sidi Fudul al-Hurawi in Fes, Morocco.