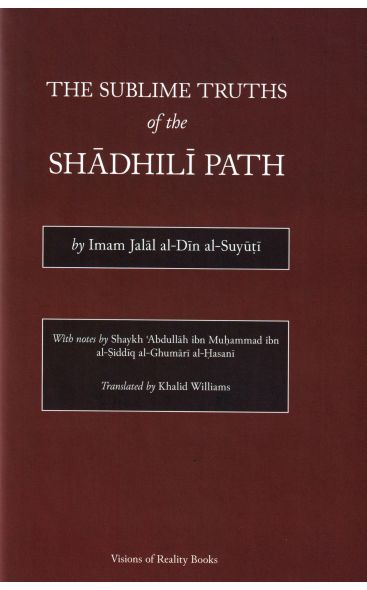 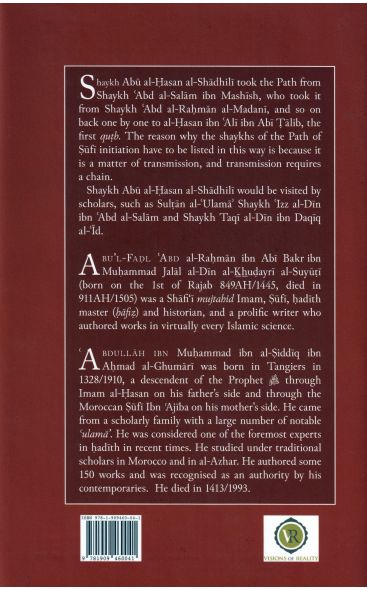 The Sublime Truths of the Shadhili Path

This is the translation of Imam al-Suyuti's risala 'Tayid al-Haqiqa al-Aliya wa Tashyid al-Tariqa Shadhiliya' - on the Shadhili Tariqa. Imam al-Suyuti who was a Shadhili himself writes writes in erudition about tasawwuf and its place as an essential traditional Islamic science. An essential read - the book is further enhanced by notes by Shaykh Abdullah ibn Muhammad ibn al-Siddiq al-Ghumari Shaykh Abu al-Hasan al-Shadhili took the Path from Shaykh 'Abd al-Salam ibn Mashish, who took it from Shaykh 'Abd al-Rahman al-Madani, and so on back one by one to al-Hasan ibn 'Ali ibn Abi Talib, the first qutb.

The reason why the shaykhs of the Path of Sufi initiation have to be listed in this way is because it is a matter of transmission, and transmission requires a chain. Shaykh Abu al-Hasan al-Shadhili would be visited by scholars, such as Sultan al-'Ulama Shaykh 'Izz al-Din ibn 'Abd al-Salam and Shaykh Taqi al-Din ibn Daqiq al-'Id. Abu'l-Fadl 'Abd al-Rahman ibn Abi Bakr ibn Muhammad Jalal al-Din al-Suyuti (born on the 1st of Rajab 849AH/1445, died in 911AH/1505) was a Shafi'i mujtahid Imam, Sufi, hadith master (hafidh) and historian, and a prolific writer who authored works in virtually every Islamic science.

Abdullah ibn Muaammad ibn al-Siddiq ibn Ahmad al-Ghumari was born in Tangiers in 1328/1910, a descendents of the Prophet a through Imam al-Hasan on his father's side and through the Moroccan Sufi Ibn 'Ajiba on his mother's side. He came from a scholarly family with a large number of notable 'ulama'. He was considered one of the foremost experts in hadith in recent times. He studied under traditional scholars in Morocco and in al-Azhar. He authored some 150 works and was recognised as an authority by his contemporaries. He died in 1413/1993.

Imam Jalal al-Din al-Misri al-Suyuti al-Shafi'i al-Ash'ari, also known as Ibn al-Asyuti (849-911AH /1445-1505), the mujtahid imam and renewer of the tenth Islamic century, foremost Hadith master, encyclopaedist, historian, and biographer and probably one of the most prolific of all Islamic writers. There are an enormous number of his essays and treatises preserved today.

A number of his writings concerned scientific topics or issues related to natural science and food and regimen, amongst other things From Asyut in Egypt, he was among the most renowned and prolific Muslim scholars of all time. He wrote more than 300 books, covering every aspect of the Islamic sciences. He memorized the Qur’an at the age of ‘eight, and then went on to study with more than 150 scholars. He traveled extensively in his quest for knowledge — to Damascus, Hijaz, Yemen, India, Morocco, and the lands south of Morocco, as well as in Egypt.