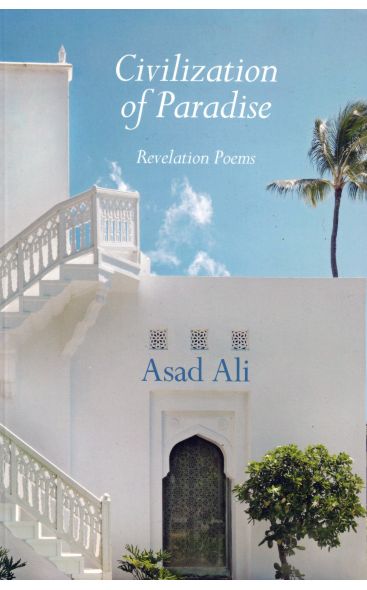 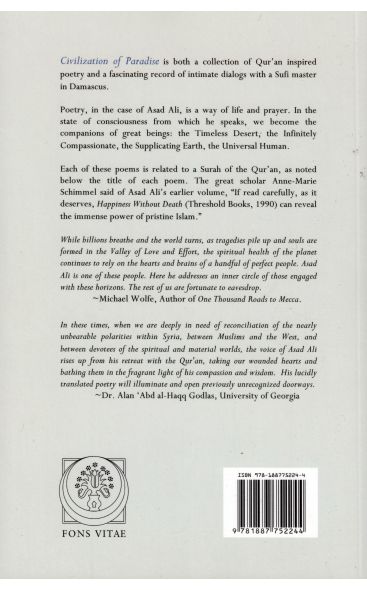 Civilization of Paradise is both a collection of Qur’an inspired poetry and a fascinating record of intimate dialogs with a Sufi master in Damascus. Poetry, in the case of Asad Ali, is a way of life and prayer.

Tajweed For young Children – A Translation of...

of Paradise is both a collection of Qur’an inspired poetry and a fascinating record of intimate dialogs with a Sufi master in Damascus. Poetry, in the case of Asad Ali, is a way of life and prayer.

In the state of consciousness from which he speaks, we become the companions of great beings: the Timeless Desert, the Infinitely Compassionate, the Supplicating Earth, the Universal Human. Each of these poems is related to a Surah of the Qur’an, as noted below the title of each poem.

Assad Ali is an eminent Islamic thinker and a living spiritual master in the storied tradition of such great Sufis as Ibn Arabi and Rumï. He received spiritual training in several Sufi schools, including the Shadhiliyyah, Qadiriyyah, and Riffaiyyah schools. He is the author of many books, most notably In the Lights of the Quran, a 25-volume multilevel poetic expression of the Quran in accordance with the seven spiritual stations of the human being.

He is a former a professor of literature, linguistic methodology, and rhetoric at Damascus University and has written more than a thousand papers and research studies and is widely published in Arabic magazines and newspapers. Kabir Helminski is a Shaikh of the Mevlevi Order of Sufis, which traces its inspiration to Jelaluddin Rumi.

He and his wife founded and now direct the Threshold Society, a non-profit educational foundation that has developed programs to provide a structure for practice and study within Sufism and spiritual psychology. He has translated many volumes of Sufi literature, including the works of Rumi, and is the author of two books on Sufism. He lives in Santa Cruz, California.

Kabir Helminski is the Co-Director of the Threshold Society (sufism.org), a non-profit educational foundation that has developed programs that provide a structure for practice and study within Sufism and spiritual psychology. He has translated many volumes of Sufi literature, including many works of Rumi, and is the author of two books on Sufism: Living Presence and The Knowing Heart. His most recent book is Love's Ripening, Rumi and the Journey of the Heart.

From 1980 until 1999 he was the director of Threshold Books, one of the foremost publishers of Sufi literature. Between 1994 and 2000 he toured with the whirling dervishes of Turkey, bringing the spiritual culture of the Mevlevis to more than 100,000 people. His books have been translated into Spanish, Italian, Dutch, German, Russian, Indonesian, and Turkish. He has an M.A. in transpersonal studies and an honorary Ph.D. in literature from Selçuk University, Konya, Turkey.

For more than thirty years, Mr. Helminski's focus has been developing and sharing a contemporary approach to Islamic concepts and practice, both within the Islamic community and outside of it. In 2001 he was the first Muslim to deliver the prestigious Harold M. Wit Lectures on Spirituality in Contemporary Life at Harvard Divinity School. Helminski lives with his family near Santa Cruz, California, and now focuses on Sufi music, writing, teaching, and developing a program of spiritual education with an international team of scholars. He is the founder and director of the Baraka Institute (barakainstitute.org) and also a core faculty member of the Spiritual Paths Institute (spiritualpaths.net).

Kabir was the music director for the award-winning, PBS-broadcast documentary Muhammad: Legacy of a Prophet (2002), produced by Unity Productions Foundation.

In 2009 Kabir was named as one of the 500 Most Influential Muslims in the World by the Royal Islamic Strategic Studies Center in association with Georgetown University. He is one of the signatories of A Common Word Between Us and You, an open letter by Islamic scholars to Christian leaders, calling for peace and understanding.