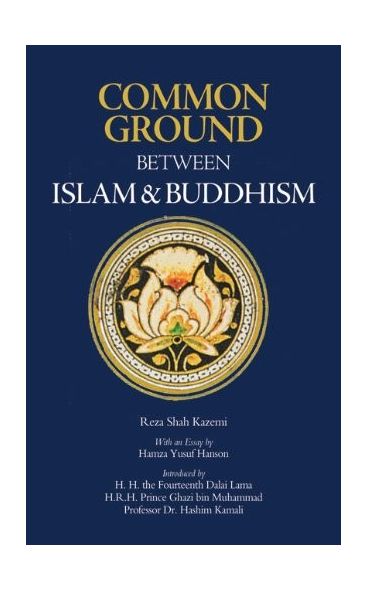 Common Ground Between Islam and Buddhism

Forging a interfaith dialog between traditions that typically stand at odds, his groundbreaking book explores the scriptural and spiritual tenets of Islam and Buddhism in relation to one another, creating a basis for comparison and analysis of the two traditions.

Forging an interfaith dialog between traditions that typically stand at odds, this groundbreaking book explores the scriptural and spiritual tenets of Islam and Buddhism in relation to one another, creating a basis for comparison and analysis of the two traditions. The discussion juxtaposes foundational principles and practices by linking underlying principles and fostering a mutual appreciation between followers of both religions. This interfaith initiative focuses upon metaphysical and ethical aspects of Islam and Buddhism, placing them in context with each other, thus encouraging understanding, and providing a point of reference for continuing and deepening reciprocal respect and collaboration. In their respective introductions to this book, H.H. the Dalai Lama states that the book helps demonstrate that Islam is indeed a 'path of salvation'; while leading Islamic scholar of jurisprudence, Prof Mohammad Hashim Kamali, asserts that on the basis of this book one can argue that Buddhism is an authentic 'deen' or religion.

This is an important and pioneering book, which seeks to find common ground between the teachings of Islam and of Buddhism. It is my hope that on the basis of this common ground, followers of each tradition may come to appreciate the spiritual truths their different paths entail, and from this develop a basis for respect for each others’ practice and beliefs.This may not have occurred very often before, because there has been so little opportunity for real understanding between these two great traditions.This book attempts to set that right ... From a Buddhist point of view, the practice of Islam is evidently a spiritual path of salvation.

- His Holiness, the Fourteenth Dalai Lama

With compelling evidence, drawing upon a dazzling interplay of scriptural and spiritual authorities from both traditions, the reader is led on a pilgrimage to the respective hearts and foundational principles of these great revelations. This results in an unusually profound enrichment and understanding of the two faiths, when juxtaposed, on subjects varying from Ultimate Reality to worship.

By exploring our mutual longing for ethical and spiritual community, we can find the means to reach the goal of peaceful engagement. Common Ground is both informative and inspiring. I am grateful for this initiative and believe that Muslims and Buddhists who live together, from America to Malaysia, will benefit from this scholarship and guidance."

[This is] the essential aim of the Common Ground project: inviting into our tent the stranger who may not look, worship, or be like us in many ways, because he or she is a creation of God, here for a purpose, and someone to be honored as a fellow guest of God .... Buddhists are heirs to a very powerful spiritual training.

- Shaykh Hamza Yusuf Hanson (from his essay in this volume)

[Common Ground is] .... an earnest attempt to help Muslims to see Buddhism as a true religion, and Buddhists to see Islam as an authentic Dharma.

Reza Shah-Kazemi studied International Relations and Politics at Sussex and Exeter Universities before obtaining his PhD in Comparative Religion from the University of Kent in 1994.

He has authored several works, including most recently The Spirit of Tolerance in Islam (IIS/IB Tauris, 2012), Spiritual Quest: Reflections on Qur’anic Prayer according to the teachings of Imam ‘Ali (IIS/IB Tauris, 2011); Common Ground Between Islam and Buddhism (Fons Vitae, 2010); Paths to Transcendence: According to Shankara, Ibn Arabi and Meister Eckhart (World Wisdom, 2006);Justice and Remembrance: Introducing the Spirituality of Imam 'Ali (IIS/IB Tauris, 2006) and The Other in the Light of the One The Universality of the Qur'an and Interfaith Dialogue (Islamic Texts Society, 2006).

Formerly a Consultant to the Institute for Policy Research in Kuala Lumpur, Malaysia, Dr Shah-Kazemi is at present a Research Fellow with the Department of Academic Research and Publications where he is Managing Editor ofEncyclopaedia Islamica, the English translation and edition of the on-going multi-volume Persian Great Islamic Encyclopaedia (Da’irat al-Ma’arif-i Buzurg-i Islami).

He is currently working on a volume of essays entitled: The Same God? Essays on Muslim-Christian Understanding. He is also working on a biography of Imam Ali:The Triumph of Sanctity: Ali b. Abi Talib.

His Holiness the 14th Dalai Lama, Tenzin Gyatso, describes himself as a simple Buddhist monk. He is the spiritual leader of Tibet. He was born on 6 July 1935, to a farming family, in a small hamlet located in Taktser, Amdo, northeastern Tibet. At the very young age of two, the child who was named Lhamo Dhondup at that time, was recognized as the reincarnation of the previous 13th Dalai Lama, Thubten Gyatso.

On 14 March 2011 His Holiness sent a letter to the Assembly of Tibetan People's Deputies (Tibetan Parliament in exile) requesting them to devolve him of his temporal (political) power. According to The Charter of the Tibetans in Exile, His Holiness was technically still considered to be the head of state. The historic announcement would bring an end to the dual spiritual and political authority of the Dalai Lama and revert to the previous tradition of the first four Dalai Lamas being only the spiritual leader of Tibet. The democratically elected leadership would assume complete formal political leadership of Tibet. The Ganden Phodrang, the institution of the Dalai Lamas, would continue and remain intact.

On 29 May 2011 His Holiness signed into law the formal transfer of his temporal power to the democratically elected leader. This brought to an end the 368-year old tradition of the Dalai Lamas being both spiritual and temporal head of Tibet.