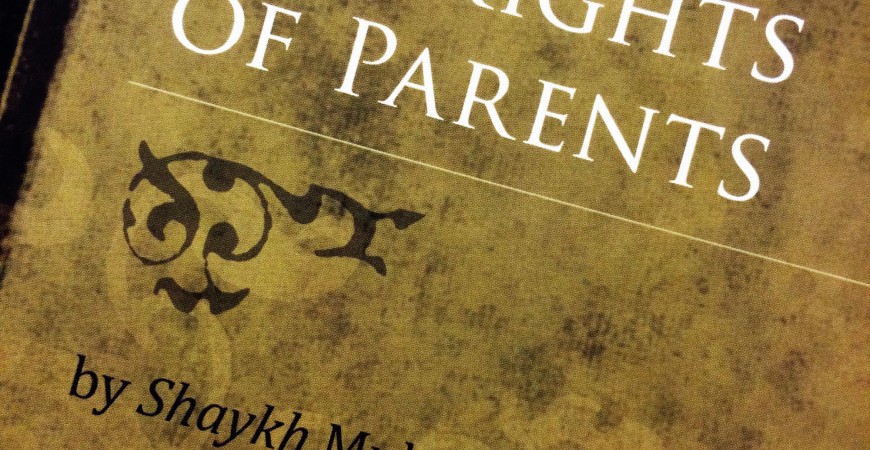 Book Review: The Rights of Parents

Shaykh Muhammad Mawlud (d.1905) was one of the greatest scholars from the land of Chinguett, more commonly known as Mauritania. He is considered to be a mujaddid, or ‘reviver of the faith’. He mastered all the sciences of Islam and was famous for his knowledge and piety. The tenets of Islam are to be practiced by scholars and non-scholars alike and that knowledge must be accessible to everyone. Shaykh Muhammad Mawlud mastered the ability to transfer immense amounts of much needed knowledge to the masses by means of simple texts such as this text on the Rights of Parents.

Some readers may be familiar with Shaykh Mawlud as Shaykh Hamza Yusuf also translated another one of Shaykh Mawlud’s poems, in the book, Purification of the Heart. Shaykh Hamza also has a lecture series on the Prohibitions of the Tongue, which is another poem by Shaykh Mawlud.

A brief biography of Shaykh Rami Nsour is also included on the back cover:

(Shaykh) Rami Nsour al-Idrisi has studied Islamic sciences since 1998 under the guidance of a number of traditional scholars in Mauritania. His teachers have given him ijaza (traditional teaching license) in various subjects including Islamic Law, Creed and Spirituality. He is the co-founder and director of the Tayba Foundation and is working on a comprehensive Islamic curriculum for English speaking students.

Shaykh Rami writes in the Foreword:

Respecting and caring for one’s parents (birr al-walidayn) is one of the foundational aspects of human society that all major religions and cultures teach. We are witnessing a wholesale breakdown of this respect towards parents. This comes as no surprise to Muslims who were warned by the Prophet Muhammad (peace be upon him) that at the end of time, there will be much disrespect towards parents. In some societies, people have watched an almost complete deterioration of the tradition of birr al-walidayn in just one generation…

This text has changed me, and continues to change me, for the better. It has brought me closer to Allah (Glorified and Exalted be He) by understanding the true nature of the Divine commandment to respect one’s parents. I have also seen this text change countless people in allowing them to have better relationship with their parents. Once, after quickly going through the text in a study circle (halaqa), a man came to me amazed by the contents of the text. He told me, “I have not spoken to my father for 16 years out of sheer hatred. I guess it’s time that I call him.” When Shaykh Saleck bin Sidine taught this text at the Zaytuna Institute in California, a sister who people would often go to for advice told him of a change that she witnessed. She said, “People used to always complain to me about their parents but after this text was taught, those complaints have stopped.” I myself have taught the text to children in study circles and many of their parents have told me of the clear change they have seen in their children. All those who have studied any books in the Adab Series of Shaykh Muhammad Mawlud can attest to seeing change in themselves and in others after going through his remarkable texts.

We often hear from our scholars to be good to our parents and to not say even ‘uff to them. This poem takes this obligation and expands on the comprehensiveness of this command from Allah. The book uncovers aspects of the command that we do not give any thought to. The book leaves the reader with a greater understanding of the command, leading to a deeper commitment to rectifying one’s character and maintaining a loftier behaviour towards one’s parents.

One of lines of the poem, which indicate on the comprehensive of birr (respecting and honouring one’s parents) in the introduction reads:

The essence of burur is attained through speech, heart, body and wealth.

Under the section of birr of the hands, Shaykh Rami includes in his commentary the following:

This would include anything else that is done with the hands such as throwing the hands up in the air at them in disgust, clenching a fist when speaking with them, or hitting an object in frustration when dealing with them.

In regards to the eyes:

A’ishah (may Allah be pleased with her) narrated that the Messenger of Allah (peace be upon him) said, “One has not done birr if he looks sharply at his father”

The commentary of the poem includes many references of Quranic verses which mention treating parents well and fulfilling their rights. The level of detail in which Shaykh Mawlud and Shaykh Rami delve into leave the reader in awe of the high conduct that is expected from a child. Shaykh Rami goes at length to define many of the Arabic terms in the poem giving the reader a greater appreciation of the nuances of good character.

In the chapter on the Mother, Shaykh Mawlud writes:

If she gives you an order, then obey quickly
Refrain if she prohibits you from something and do not do tarattul.

Shaykh Rami writes in his commentary:

Muhammad al-Hasan said, “Tarattul in the Hassani dialect means that for every word the mother utters, the child has a disrespectful and undignified response that bothers her”

We conclude this review with the same supplication that Shaykh Rami concludes the book with:

-A Lecture by Shaykh Rami on the Rights of Parents:

Purification of the Heart:...

Purification of the Heart CD 17...

The Rights of Parents : Al-Zafar...

The Hijrah A Work of Love Benefits of Ṣalawāt calligraphy