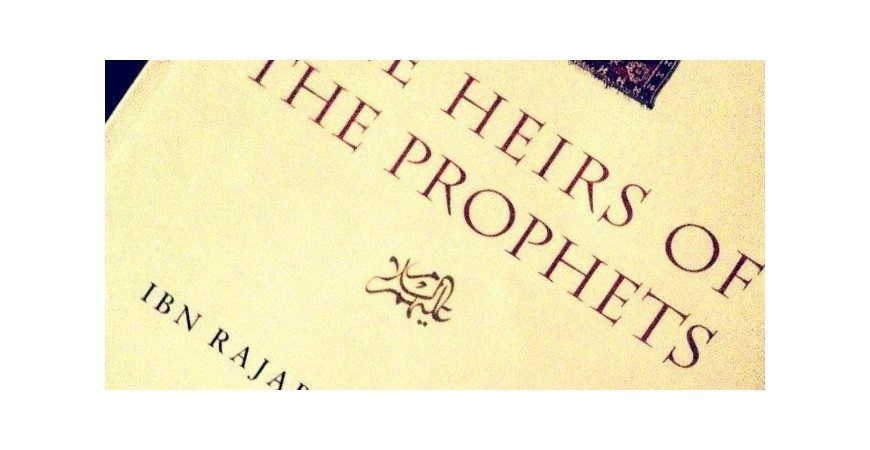 Book Review: The Heirs of the Prophets

Title: The Heirs of the Prophets (peace be upon them all)
Author: Imam Ibn Rajab al-Hanbali
Introduction and Translation: Imam Zaid Shakir
Publisher: The Starlatch Press (2001)

Imam Zaid Shakir delivers to the English reader a great work by a great scholar from our tradition, Imam Ibn Rajab al-Hanbali. Imam Zaid, needing no introduction, is one the most respected and influential scholars in the west. In regards to his biography, Imam Zaid provides a fascinating chapter entitled, ‘The Making of a Muslim’ regarding his journey to and in the faith in his book, Scattered Pictures: Reflections of an American Muslim. He is currently serving on the Board of Trustees at Zaytuna College, as a Co-Founder and Chairman. We are truly indebted and privileged to have the opportunities to sit in his gatherings and benefit from his presence. May Allah preserve him and increase his rank. Ameen.

Imam Ibn Rajab al-Hanbali was born in Baghdad in the year 736AH. At the age of eight he moved to Damascus along with his father, and it was here where he started his study of the sacred sciences, with the memorization of the Holy Qur’an. In his pursuit of hadith he traveled to Makkah, Egypt and other centers of learning in the Islamic world. Imam Ibn Rajab was a student of Imam Ibn Qayyim al-Jawziyya, who was a student of Imam Ibn Taymiyya. Imam Ibn Rajab was also a leading scholar of hadith in his era and his well known for his book, The Compendium of Knowledge and Wisdom, considered by most scholars to be the best commentary of Imam Nawawi’s Forty Hadith. This book has been published by Turath Publishing. Imam Zaid Shakir relates in his introduction of Imam Ibn Rajab the following story, indicative of his status with Allah:

It is related that he went to a gravedigger a few days before his death and requested him to begin digging. When the digger completed his task, Ibn Rajab descended into the grave, reclined in it, then remarked, “Excellent!” A few days later, Ibn Rajab passed on and his body was brought to that very grave to be interned therein

These following excerpts from the back cover of the book, provide a good summary of its themes:

The Heirs of the Prophets is an eloquent and persuasive advocate of restoring our sense of priority when it comes to the acquisition of knowledge and, as a consequence, the conduct of our lives.

This book achieves two major triumphs that speak to the modern intellectual condition. First, it deeply inspires in the serious reader – like very few books of human origin – the love and desire to gain true knowledge. It enlightens people as to what realm of knowledge holds firm sovereignty over the rest and is most vital for a true Islamic renaissance. As for the second achievement, The Heirs of the Prophets unabashedly strips away any pretension as to what measures as true scholarship within the realm of Islamic learning itself. These pretensions have had uninterrupted breeding seasons over the years, to the point that it is difficult for most people today to distinguish between a preacher and a scholar, between technique and deep comprehension.

This book is Imam Ibn Rajab’s commentary on the following hadith that is related by Abu Darda (May Allah be pleased with him):

A man came to Abu Darda’ while he was in Damascus. Abu Darda’ asked him “What has brought you here, my brother?” He replied, “A hadith which you relate from the Prophet (saw). Abu Darda’ asked, “Have you come for some worldly need?” He replied, “No.” “Have you come for business?” He said, “No.” “You have come only to seek this hadith?” He said, “Yes.” Abu Darda’ then said, “I heard the Messenger of Allah (saw) say: ‘Whoever travels a path seeking sacred knowledge, Allah will place him on a path leading to Paradise. The angels lower their wings for the student of sacred knowledge, pleased with what he is doing. The creatures in the heavens and earth seek forgiveness for the student of sacred knowledge, even the fish in the water. The superiority of the religious scholar over the devout worshipper is like the superiority of the full moon over the other heavenly bodies. The religious scholars are the heirs of the prophets. The prophets leave no money as a bequest, rather they leave knowledge. Whoever seizes it has taken a bountiful share.” (Imam Ahmad, Abu Dawood, at-Tirmidhi, ibn Majah)

Traveling a path seeking sacred knowledge can be understood as literally walking to the gatherings of knowledge. It can also encompass a more general meaning, like traveling an intangible path leading to the attainment of knowledge. This includes memorizing, studying, reading, making notes, comprehending, contemplating, and other acts which facilitate learning.

In Chapter Three, Imam Ibn Rajab comments on the importance of humility on this path:

In a well-known hadith, the Prophet (peace be upon him) relates, “If you pass by the Gardens of Paradise, graze therein.” The Companions asked, “What are the Gardens of Paradise?” He said, “Circles of dhikr [remembrance of Allah].” Whenever he mentioned his hadith, Ibn Masud would say, “I do not mean gatherings of sermonizes, but study circles.”

It is obvious from the preceding chapters that love of the sincere scholars is an essential part of this religion. Ali (may Allah be pleased with him) said to Kumayl ibn Ziyad (may Allah be please with him), “Loving the scholars is an act of worship.” A well-known narration exhorts us, “Be a scholar, a teacher, a listener, or one who loves them. Do not be in a fifth category and thereby be ruined.”

Regarding the virtue of knowledge over ordinary worship:

Abu Darda (may Allah be pleased with him) said, “Studying religious knowledge for an hour is better than spending the night in prayer.”

Lastly, in regards to the great inheritance of the Prophets (peace be upon them all):

Just as the scholar has inherited the Messenger’s knowledge, it is fitting that he leave a heritage of knowledge as the Messenger (peace be upon him) did. The scholar’s heritage is what he leaves behind through teaching, writing, and other endeavors which benefit people after him.

As such, we continue to his day to benefit from the inheritance of the Prophets, preserved by each scholarly generation one after another, leaving us this inheritance to cling to, illuminating our way and guiding us on a well-trodden path to Allah. May Allah make us all those to earnestly seek out this great inheritance and bless us to sit at the feet of the inheritors of the Prophets and bless us to act upon that which we know. May Allah increase all those who assisted in making this book available to us, and I pray we all obtain and read it frequently, emboldening our love for the Prophets, the Scholars, their knowledge and the paths leading to it. Ameen. 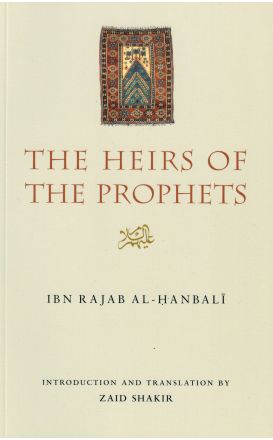 The Heirs of the Prophets