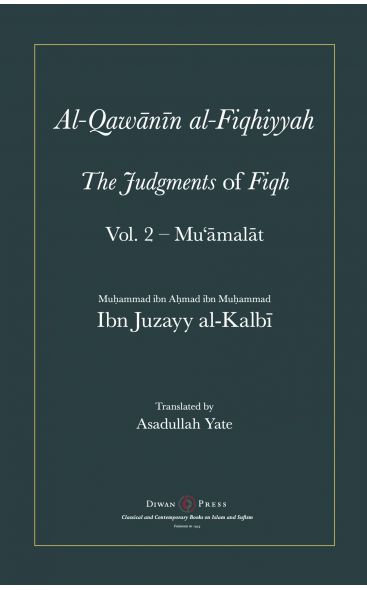 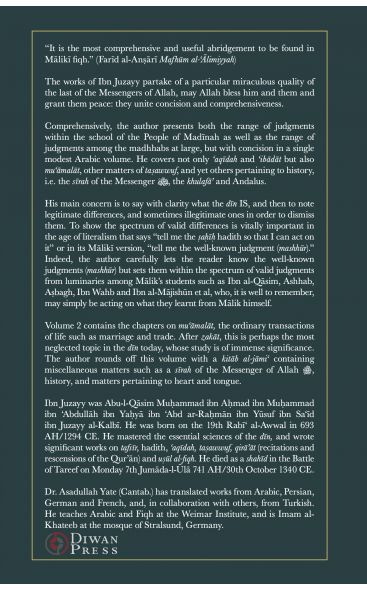 Al-Qawanin al-Fiqhiyyah: The Judgements of Fiqh - Vol. 2 (Mu'amalat & Other Matters)

The works of Ibn Juzayy, including his tafsīr and this work of fiqh, partake of a particular miraculous quality of the last of the Messengers of Allah, may Allah bless him and them and grant them peace: they unite concision and comprehensiveness. He said, peace be upon him, “I was given concise comprehensive speech (jawāmi‘ al-kalim).” (Al-Bukhārī (7013) and Muslim (523)). The comprehensive character of this book is evident enough in that the author presents both the range of judgments within the school of the People of Madīnah as well as the range of judgments among the madhhabs at large, something ordinarily encompassed in multi-volume tomes by erudite scholars, but here achieved with concision in a single modest Arabic volume. It is comprehensive also in covering not only ‘aqīdah and ‘ibādāt, in volume 1 of our translation, but also mu‘āmalāt, and other matters ordinarily regarded as being under the rubric of taṣawwuf, and yet others pertaining to history, i.e. the sīrah of the Messenger, peace be upon him, the khulafā’ and Andalus, in volume 2.

Moreover, the author escapes entirely the trap that lies in wait for such an ambitious project: the cleverness that dazzles but confuses. His main concern is to say with clarity what the dīn IS, and then to note the legitimate differences, and sometimes the illegitimate ones in order to dismiss them. To show the spectrum of valid differences is vitally important in the age of literalism that says “tell me the ṣaḥīḥ hadith so that I can act on it” or in its Mālikī version, “tell me the well-known judgment (mashhūr).” The author carefully lets the reader know the well-known judgment (mashhūr) but sets it within the spectrum of valid judgments from the luminaries among Mālik’s students, such as Ibn al-Qāsim, Ashhab, Aṣbagh, Ibn Wahb and Ibn al-Mājishūn et al, who, it is important to remember, may have been acting on and speaking by what they learnt from Mālik, unless, as with the case of Ibn al-Qāsim in the Mudawwanah when he specifically says on the occasion that he heard nothing from Mālik about an issue but his own opinion is such-and-such.

Lastly, the work has another quality, which it shares with the Risālah of Ibn Abī Zayd al-Qayrawānī, and which is easy enough to overlook: the narrative quality of someone who is recording what he knows rather than laboriously researching in various learned tomes and then writing down his results.

This book was not written in a library as part of a private conversation among scholars, with their agreements, disagreements, and disputes, but was written by a man of knowledge engaged in living the dīn and acting by it, and will be of benefit to people who take it on the same terms. May Allah make it of benefit to Muslims new and old, in the East and the West, in a new age for the dīn.

Diwan Press is publishing this important work in two volumes: Vol.1 on ‘Aqīdah and ‘Ibādāt, and Vol.2 on mu‘āmalāt, the ordinary transactions of life such as marriage and trade. After zakāt, this is perhaps the most neglected topic in the dīn today, whose study is of immense significance. The author rounds off this volume with a kitāb al-jāmi‘ containing miscellaneous matters such as a sīrah of the Messenger of Allah, may Allah bless him and grant him peace, history, and matters pertaining to heart and tongue.

His son, Abū Abdullah Muḥammad ibn Juzayy al-Kalbī (d. 758 AH), the scribe of the Riḥlah of Ibn Battuta, is sometimes confused with him.