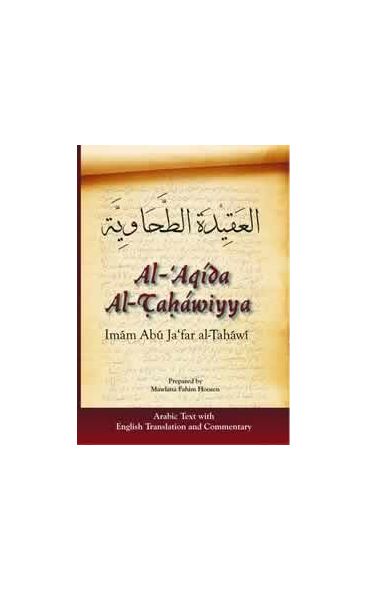 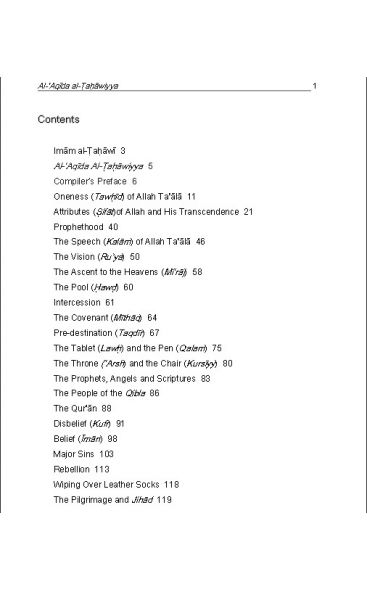 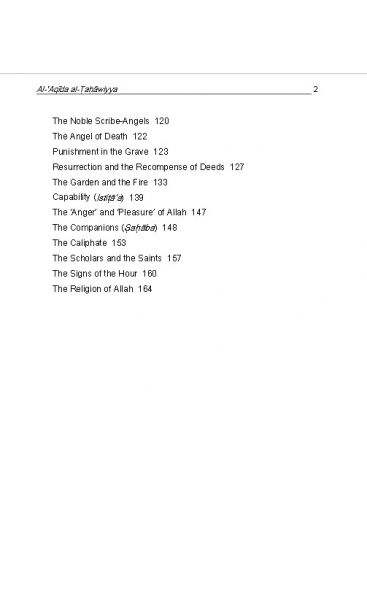 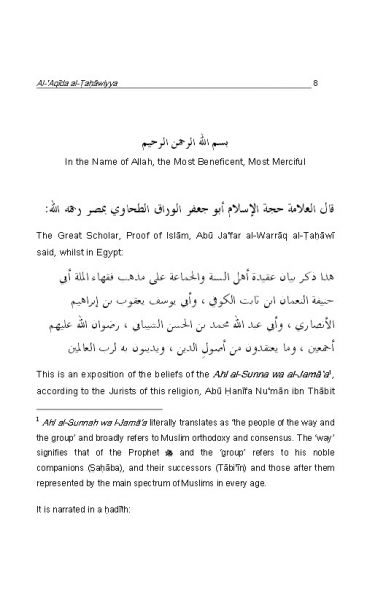 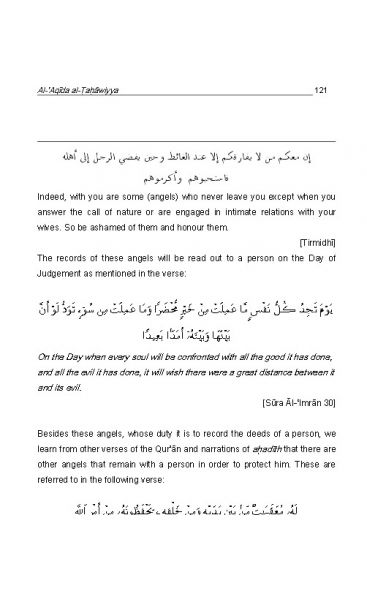 This short treatise on 'Aqida (Islamic theology) written by Imam al-Tahawi though small in size, is a basic text for all times, listing what a Muslim must know and believe.

This short treatise on 'Aqida (Islamic theology) written by Imam al-Tahawi though small in size, is a basic text for all times, listing what a Muslim must know and believe.

The importance of this text lies in the fact that it corroborates the views of Imam Abu Hanifa the founder of the Hanafi school of jurisprudence, that have come down to us from different sources.  Imam  al-Tahawi summarizes  the views  of the great Imam  and  shows  that  they  were  in  conformity with  the traditional views of the orthodox school.

The doctrines enumerated in this work are entirely derived from the undisputed primary sources of religion, the Qur'an and the confirmed hadith. This text, representative of the viewpoint of Ahl al-Sunna wa'l Jama'a, has long been the most widely acclaimed, and indeed indispensable, reference work on Muslim beliefs.

This edition includes a brief and simple commentary by Mawlana Fahim Hoosen. The focus in his commentary is explaining the correct belief of a Muslim while avoiding technical discussions and intricacies of debate around theological issues.

Imam Abu Ja'far al-Ṭaḥawi or simply al-Ṭaḥawi (843 or 853 to 933) was a famous Sunni Islamic Scholar who followed the Hanafi madhhab.

Taḥawi was born in the village of Taha in upper Egypt to an affluent family. He began his studies with his maternal uncle Isma`il ibn Yahya al-Muzani, a leading disciple of Shafi`i. When Tahawi was about 20 years old he abandoned the Shafi'i school and transferred to the Hanafi School.Different versions are given by his biographers of his conversion to the Hanafi school, but the most probable reason seems to be that the system of Abu Hanifa appealed to his critical insight more than that of Shafi'i.Tahawi then studied under the head of the Hanafis in Egypt, Ahmed ibn Abi Ibrahim, who had himself studied under the two primary students of Abu Hanifa, Abu Yusuf and Muhammad al-Shaybani. Tahawi next went to Syria in 268/882 for further studies in Hanafi Law and became the pupil of the chief judge of Damascus.

Tahawi gained an extraordinary knowledge of hadith in addition to Hanafi jurisprudence and consequently his study circles attracted many scholars who related hadith from him and transmitted his works. Among them were al-Da'udi, the head of the Zahiris in Khurasan and al-Tabarani well known for his biographical dictionaries of hadith transmitters.

Tahawi's extraordinary knowledge of hadith in addition to Hanafi jurisprudence is evident from his significant book Kitab ma'ani al-athar and his concise creed (aqida) has also achieved a prominent place among most Sunni scholars to this day.

The scholars of his time praised him and mentioned him as being a scholar of Hadith (Muhaddith), one whose report was reliable and an established narrator. He was viewed as a distinguished and highly proficient writer and became known as the most knowledgeable of fiqh amongst the Hanafis in Egypt. This was even though he had a share in the fiqh of all of the madhabs of fiqh and hadith, and he knew of the various sciences of Islam. Ibn Yoonus said of him, "At-Tahaawee was reliable, trustworthy, a Faqeeh, intelligent, the likes of whom did not come afterward."

He completed a BA with Honors in Semitic Languages and Cultures at the University of Johannesburg (2008-2010) and was certified a Shariah Advisor and Auditor (CSAA) by the Accounting and Auditing Organization for Islamic Financial Institutions (AAOIFI) in 2010.

He has previously authored and published Anis al-Musafir - An explanation of the Islamic law of travel in accordance with the Hanafi School of Islamic law.